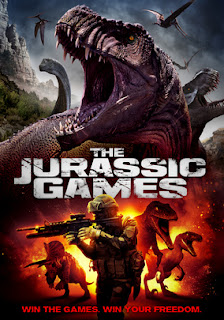 The Jurassic Games was a flick Scott spotted on Netflix and had sent to us. When he told me what the deal was supposed to be about, I was less than impressed. But, an action movie is an action movie and we had it here, so I figured, what the heck?

In the near future, every year 10 of the world's most lethal death row criminals compete for their freedom in "The Jurassic Games", a TV show where contestants must survive against ferocious dinosaurs and each other. The last survivor is granted freedom, fame, and fortune.

Freedom anyway. Having seen this deal, I am not so sure about the fame and fortune part. All in all, this was a decent action movie. Not epic, but certainly not hideous either. The CGI is a bit weak in some spots, but for the most part, pretty good. Dialogue was decent and those involved did not practice the sin of overacting. The movie had a bit of a secondary storyline that also was not only interesting, but had some relevant social commentary.

Both Amazon and Netflix have it as non-rated as is typical with straight to DVD flicks. There is no frontal nudity, let alone nudity of any type in the movie. Language, at times, is on the adult side, but nothing that just burns your ears off.  Violence, human upon human(s) as well as creature on creature and creature on human(s) is off the charts. Depending on the individual viewer involved, I would think teen and beyond. Atthe same time, my late eighty year old Mom would have been bothered by the violence so this one would have not been appropriate for her either.

Bottom line…..we enjoyed it for what the movie is. Did not expect much out of it and was pleasantly surprised. Enjoyed it much more than Escape Plan 2: Hades from last week and way more than The Hurricane Heist from early June.
Posted by Kevin R. Tipple at 1:00 AM