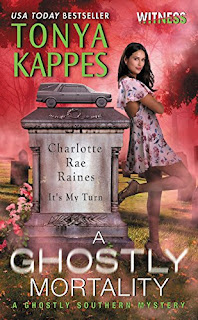 I came late to this series, since this was the only title at the local Books A Million.

Emma Lee Raines’ family has run a mortuary for years in a small town in Kentucky.  Emma is known for having “Funeral  Trauma,” which is to say that she takes these odd turns when she doesn’t make sense or talks to herself or even seems faint.  The truth is that Emma Lee is a “Betweener,” someone who can see and talk to the dead to help them get to the Afterlife.  In Emma Lee’s case, the dead she sees have been murdered and it’s up to her to solve the crime so they can rest in (presumable) peace.

The case in A Ghostly Mortality hits especially close to home when the dead person she sees is her sister Charlotte Rae.  Charlotte and Emma had a strained relationship at best, since Charlotte was ambitious, organized, stylish—well, everything Emma was not—and even left the family business for a larger funeral home business in another town. Charlotte is nonplussed to find that not only is she dead but her younger sister is the only one with whom she can communicate.  The sisters have a lot to work through—and of course there is the matter of a murderer on the loose.  Good thing Emma Lee’s boyfriend is  hunky police officer  Jack Henry who can help her investigate. Jack Henry is one of the few who knows about Emma’s gift; everyone else just thinks she’s tetched in the head, as the old expression goes.

If this book is any indication, the Southern Ghost Mysteries are chock full of quirky characters, quaint expressions, and embarrassing situations.  For me, I think it was the wrong book at the wrong time; I was in the mood for a mystery and the book is more about the humor.  I had reservations about the solution to the mystery, but thinking back on it the book could be said to be rather zen. . . it’s all about the funny journey to the solution rather than the solution itself.

The cleverest thing for me was the weaving in of the next episode along with the current story as Emma keeps seeing a ghost cat wandering about the funeral home and the final scene setting up the next book really piqued my interest.

I’ll reserve final judgment until I read at least one more, but while I think Southern humor aficionados will be happy, mystery readers will be less than satisfied.