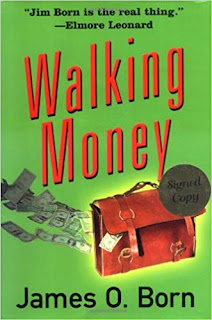 Walking Money by James O. Born (Putnam, 2004) is the first of three thrillers featuring Bill Tasker, an agent in Miami Office of the Florida Department of Law Enforcement, i.e., the Florida state police. Tasker has a black mark on his record from years ago, which makes him the perfect fall guy for Tom Dooley, a crooked FBI agent who has his eye on the cash Rev. Alvin Watson and his ex-con sidekick Cole Hodges have skimmed from the fake community activist organization they front. Hodges uses a well-timed riot and associated looting to conceal the initial theft from the small bank where the stash was being hidden. He fends off Watson in his attempt to take it but loses out to Dooley, who manages to grab the bag of money.

From there the money changes hands at a dizzying pace, leaving a trail of bodies in its wake. Everyone, gangs and corrupt cops alike, is anxious to take a cut of the peripatetic $1.5 million. All the while the lead FBI agent believes that Tasker is guilty of both theft and murder, thanks to a couple of anonymous tips from Dooley. Even the lawyer Tasker eventually retains thinks he is guilty.

His ex-wife believes in his innocence but can’t take the media circus so has told Tasker to stay away from his much-loved daughters until it’s over. Tasker knows he has been set up and sees he will have to investigate the theft himself to clear his name, because no one else is, so investigate he does.

Born used his years of work experience in the Florida Department of Law Enforcement to good effect here, describing internal police operations and interagency politics convincingly as the backdrop to a fast-moving story full of twists and turns and an unexpected ending.

Aubrey Hamilton © 2018
Aubrey Hamilton is a former librarian who works on Federal IT projects by day and reads mysteries at night.
Posted by Kevin R. Tipple at 1:00 AM