For this final Friday in July, I thought I would run again the below review which first ran in May of 2013 here. It was probably way too hot then too. The full list of books that may or may not cool you off, but just might distract you from the heat can be found over at the wonderful blog of Patti Abbott. I also remind you of the fact that these are the final few days of the current Smashwords sale where I and far more famous and prolific authors such as Barry Ergang, Kaye George, and others, have books for sale. Whatever you choose to read or watch, stay cool and hydrated.  Dallas Cowboys have started training camp so our long national nightmare is almost over as the NFL returns…. 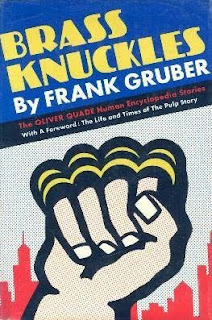 Frank Gruber had a fondness for itinerant book salesmen who stumble into murderous situations. His best-known series of novels features Johnny Fletcher and his partner Sam Cragg. Fletcher pitches the book Every Man a Samson while the muscular Cragg, who maintains he's the strongest man in the world, shows off his physique to the audience. For the pulp magazines Gruber created Oliver Quade, the Human Encyclopedia, ten of whose adventures are collected in Brass Knuckles. (One was published in Thrilling Detective. The rest appeared in the legendary Black Mask.) Quade pitches the one-volume The Compendium of Human Knowledge, which he sells for only two ninety-five. Declaring himself possessed of "the greatest brain in the , possibly the greatest in the world," he maintains that "I know the answers to all questions." Over fifteen years, he has read a twenty-four volume set of the Encyclopedia Americana four times. "I've an unusual memory," he tells a woman in one of the stories. "I remember everything I read and therefore I know everything that's in the encyclopedia." The odd bits of knowledge he's picked up often aid in the solutions of the murders he has the convenient habit of stumbling upon.

The book opens with a lengthy, fascinating foreword, "The Life and Times of the Pulp Story," in which Gruber reminisces about how he struggled to break into writing for the pulps, and about the early failures and eventual successes, large and small, he experienced. It includes an eleven-point formula he claims is a "foolproof" method for plotting a salable mystery story. Although I enjoyed them, I'm not convinced all of the stories that follow exemplify it.

In the first and shortest story in the collection, "Ask Me Another," Oliver Quade and Charlie Boston are on the verge of being locked out of their hotel room because they owe three weeks' rent. But Quade figures they can raise the money by pitching the Compendium of Human Knowledge to the attendees of the Great Chicago Auditorium Poultry Show. Neither he nor expects to encounter murder.

At the kennel show in , the last thing Quade and expect to find in their booth is the corpse of one Wesley Peters. Even more confusing is the willingness of several people in attendance to confess to shooting him. Before long, Quade tangles with the local police chief, a renowned private detective named Christopher Buck, a gangster just out of prison, and has another corpse to account for in "Dog Show Murder."

"Funny Man" takes Quade and to , where Quade is hired by Slocum Studios head man Tommy Slocum to dub the voice of cartoon character Desmond Dogg, since the actor who usually voices the character has laryngitis. Coming out of Slocum's office, Quade encounters his old adversary, self-declared "world's greatest" private detective Christopher Buck. Buck assumes Quade is working as an investigator and wants to know what he knows. Conversely, Quade wants to know the same about Buck. When studio executive Stanley Maynard, Buck's client, is found murdered, the amateur and professional sleuths compete to discover the killer's identity.

Still in and staying at an expensive hotel, Quade and owe more than four hundred dollars for rent, meals, and incidental charges—money they don't have. The hotel manager confronts them in the dining room and tells them they have until to come up with the cash or he'll have them arrested for intent to defraud. Having overheard, another diner named George Grimshaw offers them twenty dollars to deliver a letter to a Martin Lund. They accept, not worried about the two thugs who want to relieve them of the letter. They find but can't give him the letter because he's been murdered. So Quade opens the envelope, finds another envelope inside and a note from Grimshaw telling to meet him at the track. Thus, it's "Oliver Quade at the Races," where Grimshaw is also murdered and Quade must use his wits and wiles to get to the bottom of things—and pay the hotel bill.

A small passenger plane makes a "Forced Landing" in a snow-covered clearing in northern . One passenger is dead, the result of flying glass from a shattered window. The pilot is dead, too—from a bullet wound. Around the same time, Oliver Quade and Charlie Boston are driving through the area on their way to when the car runs over an animal that turns out to be a silver fox, a creature whose pelt is very valuable. When their car won't start, they have to start walking. Eventually they come to a house owned by fox breeder Karl Becker. Not long after they arrive, the airplane's co-pilot staggers in and tells them of the crash. They set out to find and bring back the remaining passengers. That's only the beginning of an adventure that includes a pair of profit-minded fugitive kidnappers, another murder, and plenty of action.

In "Death Sits Down," Quade, sans Boston, goes to the Bartlett Cash Register Company's recreation room to launch into his sales pitch, not knowing the employees are about to go on strike and prevent anyone from entering or leaving the building. Among those in it is a vicious murderer who doesn't intend to let anyone hinder the scheme he's hatched. The author does a good job of building the tension in this fast-paced story.

"Words and Music" opens with Quade and "in the dough" for a change, and relaxing in the cocktail lounge of 's Midtown Hotel, where they have rooms. They're approached by a drunk named Billy Bond who says he's a song writer, claims "I wrote the best little damn song that's been written in this damn town in the las' five years." He then hands sheet music to the lounge's piano player, tells the man to play, and sings the lyrics himself. After a pause during which he gulps some beer, violent convulsions seize him and he falls into Quade's arms—dead. The police are summoned, and Quade describes a man he saw switch glasses with Bond. The police detective recognizes the description as belonging to a deranged chemist named Soup Spooner, so named for providing nitroglycerine to safecrackers. Quade can't resist investigating, despite 's objections, and plunges into the world of music publishing rackets. Spooner is still out there, setting an insidious and deadly trap.

The second shortest story in the book, "State Fair Murder" takes Quade and to the titular location in . Quade has barely launched into his pitch when a man in the crowd falls into him, the victim of a poisoned dart in his back. As usual, despite 's protests, Quade can't resist playing detective in a case dealing with conflicts within a publishing company.

Among the "how-to" advice often given to both beginning and experienced writers is never open a story with a description of the weather. But in "Rain, the Killer," Frank Gruber does exactly that—and very effectively. This is, for me, the most exciting story in the book, so I don't want to give too much away. Suffice it to say that it's a take on the isolated, impassable locale that puts Quade (who once again is without Charlie Boston), the members of a wealthy household, and a sheriff and his deputy in dire peril from the weather and a particularly brutal murderer, one of whose crimes is depicted somewhat graphically. A whodunit, it does not play fair with the reader, but the tense and exciting situation that befalls the cast of characters more than makes up for it. The only element in the story that is somewhat dubious by modern standards is the psychology of the murderer.

In another story that omits Charlie Boston, Quade finagles his way into the barn Reggie Ragsdale converted into an arena on his estate in which to hold cockfights. " didn't see many cocking mains. Cocking wasn't a gentleman's sport like horse racing and fox hunting In fact, many of 's blue-bloods had shaken their heads when young Ragsdale took up cock fighting. But they had eagerly accepted invitations to the Ragsdale estate to witness the great cocking main between Ragsdale's birds and the best of the Old South, the feathered warriors of George Treadwell." When Treadwell is murdered, Quade as a gate-crasher becomes a prime suspect and has to solve the crime himself. "Death at the " is sort of fairly-clued, if one allows for an obscure bit of lore that provides the solution.

Were he writing today, Frank Gruber would be designated a minimalist, so stripped-down was his style. The physical descriptions of characters in these stories are always very brief and sometimes non-existent, and the people themselves are largely dimensionless names on the page. There is no sense of place of the kind one finds in, say, Dashiell Hammett and Raymond Chandler and, except in "Rain, the Killer," no real sense of atmosphere. I would not rate Gruber as one of the top-tier writers who honed their skills in the pulps, but he could nevertheless tell a story effectively, as the tales in Brass Knuckles demonstrate. They aren't serious literature to be pored over and explicated; they're fast-reading fluff meant strictly for entertainment. Regarded in that light, they're recommended.

Some of Derringer Award-winner Barry Ergang’s work is available at Amazon and Smashwords. The latter site is running its annual sale through the month of July. Barry and Kevin Tipple are among the participating authors, so take advantage of their reduced prices.

I read BRASS KNUCKLES long ago but remember enjoying it. Frank Gruber wrote prolifically and well.