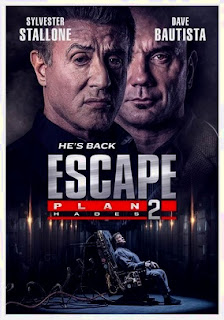 Having seen and enjoyed the original ESCAPE PLAN starring Sylvester Stallone, Scott and I were looking forward to the sequel, ESCAPE PLAN 2: HADES.

Netflix Synopsis:
“Security expert Ray Breslin returns to face a highly personal challenge when his best operative, Shu Ren, is abducted and held inside a state-of-the-art prison, making any attempt to free him virtually impossible.”

Well, they may all have had the best of intentions, but movie two is a far weaker version of the original. They ramped up the special effects, ramped down the dialogue, and created a semi yawn of a movie where Stallone is hardly around at all. Present for a few scenes in the early stages of this epic and a bit more at the end, but nowhere in between as various folks from his team are grabbed and thrown into the prison to meet each other and plot their escape.  And, if they did not escape, one could not as easily do the third movie as implied at the end.

Hopefully, if they do a third movie, at the very least they do a better job of working in the stunt double for Stallone if they must do his fight scenes. Not sure, but this visually could be worse than what is done for Steven Segall in his fight scenes these days. It is a close call and I am not willing to make the sacrifice of repeat viewings to clarify my impressions one way or another.

Do not buy this unless you have a collection of every Sylvester Stallone movie ever made. Do the rental thing through RedBox where they have both the first and the second one as a double feature deal or as this movie only by way of Netflix like we did.  Our issue was having too high expectations as we liked the first one so much. This one does not come anywhere close to that level of action adventure.

You're right, Kevin. I liked the first one and thought this might be worth a watch, even substituting Dave B. for Ahnuld. But nooo….
As you say, Stallone's barely in the movie. (BTW, it's "Steven Seagal" FWIW.)
Sucks.

We ground our way through it, but it was hard.