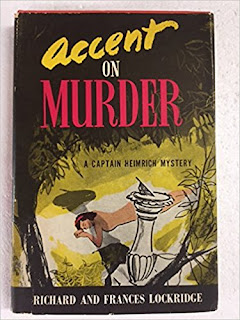 Frances Davis Lockridge (1896-1963) and Richard Lockridge (1899-1982) were journalists known mostly for their Mr. and Mrs. North mysteries. A good analysis of these books (written by Charles L.P. Silet) can be found on MysteryNet.com here:  http://www.mysterynet.com/books/testimony/norths/

About 70 books form the lavish Lockridge oeuvre, released between 1936 and 1980. In addition to the books about the Norths and Lt. Bill Weigand of the New York City police, the Lockridges also created stand-alone mysteries and mysteries with Nathan Shapiro, a police detective who worked for Bill Weigand; with Bernie Simmons, an assistant district attorney in New York City; with Paul Lane, a detective in the New York City 19th Precinct; and with Inspector Merton Heimrich of the New York State Police Bureau of Criminal Identification, stationed in upstate New York. Of them all, the books featuring Lt./Capt./Inspector Heimrich are my favorites.

Lt. Heimrich first appears in a North mystery, Death of a Tall Man (1946) and then features in his own book the following year. (The Lockridges liked to work their characters hard: Paul Lane pops up in several of the Bernie Simmons books and Nathan Shapiro appears in at least one Merton Heimrich story. Professor Emeritus Walter Brinkley shows up in multiple series.)

Heimrich’s beat is Putnam County and the surrounding area north of New York City, bordering the state of Connecticut, and a developing bedroom community at the time the books were written. The Lockridges describe the land along the Hudson River, where Putnam County is situated, lovingly; it must have been deeply important to them. A lot of the tension and action in this series derives from resentment of newcomers to what had been secluded rural enclaves owned by generations of the wealthy. With commuter trains reaching further into the country in the 1950s, suburban home ownership and work in the city became possible and many ambitious families took full advantage. Then there were the nouveau riche anxious to become country squires, also deeply disliked for their new money, presumption, and disruption to the status quo. Much of the point of these books I think was to examine a dramatically changing way of life and its impact on different groups.

In Accent on Murder, one of my series favorites because of its geek plot, Walter Brinkley, Professor Emeritus, is throwing a cocktail party for a recently married acquaintance. Professor Brinkley in his retirement is writing a book on American accents. Amusingly entitled A Note on American Regional Accents, the manuscript is some 1200 pages long and not yet complete. A newcomer to the area is killed by a shotgun and a local resident who isn’t entirely stable is suspected but those who know him can’t believe he’s violent.

While the police procedure is solid during most of the book, I have to confess the plot seems to gallop near the end and has a certain amount of “And then a miracle occurred” to wrap it up. The real strength of the book is the locale and the characters and of course Professor Brinkley’s learned commentary on the accents of everyone around him. The interaction between Professor Brinkley and his housekeeper is particularly charming. Highly recommended for anyone but especially readers of Golden Age mysteries.