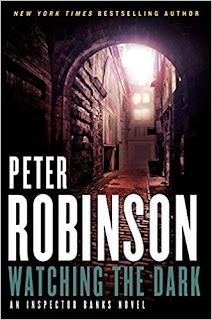 A crossbow is not a common murder weapon, yet that’s what was used to kill DI Bill Quinn at St. Peter’s Police Convalescence and Treatment Center, an isolated privately run in-patient facility for police personnel. Because the victim was a police officer, Professional Services is assigned to monitor the investigation to determine if the motive for the murder affected, or was the result of, his casework in some way. Banks resents being assigned an unofficial supervisor and is quickly at odds with his new team member.

Quinn was a recent widower and both of his children are away at college, leaving no reason to believe something in his personal life prompted his murder. No clues at the scene or at Quinn’s home or office leave Banks drawing a blank. Sifting through his casework Banks keeps coming back to the disappearance of an English girl on holiday in eastern Europe six years earlier.  Quinn was part of the original investigating team and visited the city where the missing girl was last seen. Banks can’t find concrete evidence that the two events are linked but nothing else seems to provide a semblance of a motive.

In the meantime his usual sidekick DI Annie Cabot, who recently completed a lengthy recovery from injuries sustained during her last case, begins working on what turns out to be a wide-ranging case of human trafficking and forced immigrant labor that covers most of northern England.

Robinson manages to keep this series fresh, partly by using plots from current events. Human trafficking is receiving significant attention by the authorities in the western world, who are trying to limit it and the damage it does. Likewise, the disappearance of girls on vacation overseas has filled the news headlines far too often in the past 20 years.

Although this is a long-running thread of stories, I have read the books out of order or skipped some altogether and don’t have any trouble in following the personal and professional lives of the main characters. A strong entry in a strong series.