Saturdays With Kaye: The Mirror Sisters by V. C. Andrews 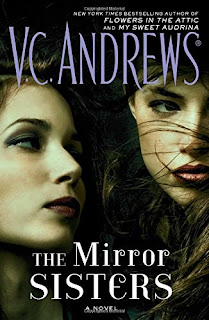 This is classic V. C. Andrews, dark and gothic, with a pair of tormented sisters. In this case, they’re tormented by their mother, who is obsessed with them being identical twins. Not just identical, but absolutely the same in every aspect. Not only their hair and clothing, but the treatment they get, the food they eat, comments made to them, equal hugs and kisses. Kaylee, Haylee’s twin, begins to think that her mother considers them one person: Kaylee-Haylee, Haylee-Kaylee, which is what she often calls them. She always makes sure to say the other name first the next time. The excruciating rituals wear thin on their father, who dares to think that maybe they might want to be considered as individuals some day. He seems to be their only hope for eventually becoming whole persons.

The girls are home-schooled so that nothing and no one can ruin their perfection. Their mother loves the fact that people stare at them when they eat out. They always respond in tandem to comments. Their mother would be upset if they didn’t.

However, the mother relents at last and lets them attend public high school. Predictably, cracks appear in the mirror. We’ve already seen that Haylee is growing adept at creating little eddies of turmoil that reflect badly on her sister. In high school, the eddies turn into dangerous whirlpools.

It’s very good that a second and third installment are planned soon. You’ll see what I mean when you finish the book. It seems to read slowly and there’s a lot of repetition, but the story is always building and the tension increasing. If you like Andrews or gothic horror, you’ll race through this book, shivering with dark delight.

Reviewed by Kaye George, author of Requiem in Red, for Suspense Magazine