It has been awhile, but Barry Ergang is back today with another all new FFB review. For the rest of the list make sure you check out Patti Abbott’s blog. 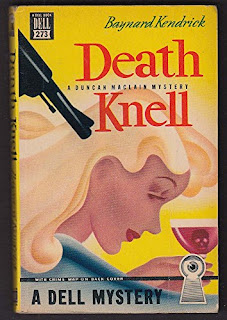 Having attained his rank twenty years earlier during World War I while an intelligence officer, and blinded during that conflict, Maclain overcame his handicap—and benefited from it by heightening his other senses—to take on the unlikely profession, along with partner Spud Savage, of private investigator.

When Troy Singleton, a woman with whom Jordan has been intimately involved, is shot to death in the author’s study with one of the firearms from his esoteric collection, Jordan is the immediate and arrested suspect. Although New York Homicide detectives Inspector Davis and Sergeant Archer, with whom Maclain has contended before, consider it an open-and-shut case, not least because of a neighboring witness, Mrs. Oliver, Maclain agrees to undertake Lucia’s investigation of her husband’s predicament. What he unearths reveals a great deal more than the police have suspected. 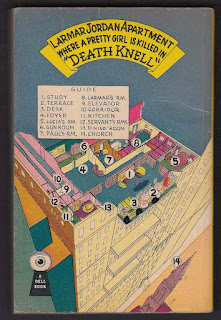 In addition to some of the aforementioned people, Maclain has to deal with as sources of information and/or as suspects Ellis Brown Mitchell, firearms expert who is cataloguing Jordan’s collection; Jess Ferguson, Jordan’s attorney; a menacing and motivated individual named Martin Gallagher; and very successful aircraft manufacturer Daniel Pine.

A generally well-written detective story with a good sense of character, Death Knell has occasional arguable stylistic lapses wherein descriptions of Maclain’s abilities are reminiscent of descriptions of pulp “super” heroes like The Shadow, Doc Savage, and others of that ilk. The novel combines the qualities of the traditional whodunit with some of the action and suspense of the hardboiled school.

Those old enough to remember the short-lived TV series Longstreet might recall its blind insurance investigator portrayed by James Franciscus. Mike Longstreet wasn’t Duncan Maclain, but the program—and thus his character—was credited to Kendrick as creator. In 1938 and the early1940s, there were several movies starring the miscast Edward Arnold (miscast physically, that is, based upon descriptions in the books) as Maclain, among them “Eyes in the Night” which, as of this writing, is available at YouTube.

Although my teenage reading about mystery series informed me of the Duncan Maclain novels, it wasn’t until paperback editions were reissued following the advent of the Longstreet program in 1971 that I actually got to read several of them. It is a worthwhile series of detective novels which merits resurrection for 21st Century readers.

While his website is http://www.writetrack.yolasite.com/  some of Derringer Award-winner Barry Ergang’s work is available at Amazon and Smashwords.com

I've enjoyed the books by Kendrick that I've read and hope to get to many more.

A quick look at Wikipedia tells us that he was one of the founders of the Mystery Writers of America, held membership card number 1, and served as its first president. In 1967, Kendrick wa named the ninth MWA Grand Master, following Agatha Christie, Vincent Starrett, Rex Stout, Ellery Queen, Erle Stanley Gardner, John Dickson Carr, George Harmon Coxe, and Georges Simenon. Kendrick was also the first American to join the Canadian Army during World War I.

I knew a little (very little) of this, but not all. Thanks for the information, Jerry.