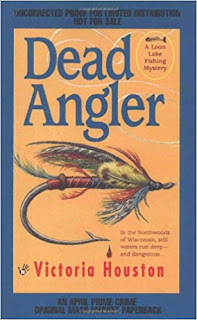 Dead Angler  by Victoria Houston (Berkley, 2000) is the first book in the Loon Lake mysteries. Set in Loon Lake, Wisconsin, a fictional town in northern Wisconsin, all of the books focus on fly-fishing and its complexities as much as they do on solving homicides. Eighteen titles have been released since the first one, the latest in June 2019. The narrator is Paul Osborne, a retired dentist who is a recovering alcoholic and who is coming out of mourning his wife who died about two years before the series opens. He decides to pick up his old hobby of fly-fishing but finds he needs some refresher training. Llewellyn Ferris is the town’s new chief of police and also an expert in fly-fishing. The owner of a local sports store links the two and they go out together on Prairie River and immediately find a body, apparently a drowning victim. Paul’s dental training becomes useful as they note suspicious injuries to the victim, who turns out to be a former patient of Paul’s, and Lew deputizes Paul to support the investigation.

Paul becomes very busy suddenly, as his neighbor and good friend Ray Pradt, a fishing guide and all-round character, needs him to help get ready for a major fishing tournament. The town resident enlisted to deliver the top-of-the-line fishing boats for the tournament has disappeared, and Ray is beside himself as the first day of the competition approaches.

Well-plotted with nicely sketched characters. Ray Pradt in particular is an original who stands out. Nothing cozy about these books: motives for crimes and those who commit them are generally of the worst kind, and alcoholism and its effects on families is a running theme. The idyllic setting of these stories is an integral part of each of them; the lakes with their native flora and fauna are ever-present, no matter what the forefront action is. The author’s respect and love for the area shines. Highly recommended series, helpful to start from the beginning but not necessary.