Back several weeks ago, Barry Ergang offered his review of The Big Bad City by Ed McBain who was also known under his legally adopted name of Evan Hunter. I realized when I was reading Barry’s FFB review that I had not read this one. As it was available from the Dallas Public Library in hardback, I picked it up and read the majority of it while at UTD waiting for Scott. For the full list of reading suggestions for this first Friday in September 2019, head over to Todd Mason’s Sweet Freedom Blog. 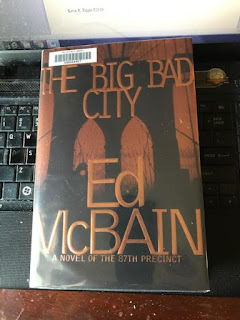 “So if you came here thinking, Gee, there’s going to be a neat little murder takes place in a town house and some blue-haired lady will solve it in her spare time when she isn’t tending her rose garden, then you came to the wrong city at the wrong time of the year. In this city, things were happening all the time, all over the place, and you didn’t have to be a detective to smell evil in the wind. (The Big Bad City, Page 32)
The detectives of the 87th precinct, let alone the other precincts of New York City have their hands full. That was before a suspect in the precinct cage knifed a fellow suspect before being shot by Detective Carella. That resulted in two teams of paramedics being brought in and the obligatory visit from Internal Affairs Detectives on a mission to determine what the heck happened. It doesn’t help that it is August and the air conditioning in the precinct house is seriously on the fritz.
Then there are the murders. 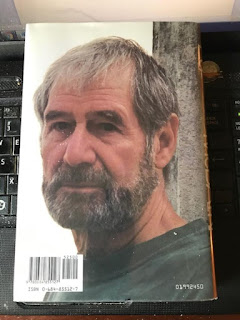 One murder is the dead young lady found in Grover Park in front of a park bench. One could tell by looking at her throat she had been strangled. Detectives Brown and Carella had been ready to call it a day and go home when their boss, Lieutenant Brynes sent them out on the case. A case that is going to become incredibly complex.
The burglar nicknamed “The Cookie Boy” continues to do his deal of breaking into places and stealing stuff before leaving a container of homemade chocolate chip cookies behind.  Detectives Mayer and Kling have been on that case quite a while. A case that may now involve two murders.
The detectives are not the only ones on the hunt in the city. So too is a man bent on revenge. His target is one of the detectives of the 87th precinct. Like some of the other two legged predators that travel through New York City, murder is on his mind.
The Big Bad City: A Novel Of The 87th Precinct is a complicated police procedural with many moving parts. Like others in the series, it is a solidly good read. As noted in the above quote, this is not a read for cozy readers who prefer sanitized language and situations.

My reading copy came from the downtown branch of the Dallas Public Library System.