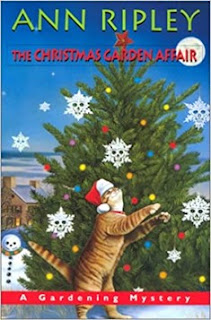 Ann Ripley published 10 cozy mysteries from 1994 to 2006 about Louise Eldridge, an organic gardener living in the Alexandria, Virginia, suburbs and hosting a gardening program on the Washington, DC, area public television station. They stood out to me partly because of the detail with which she described her neighborhood, an area that I knew well at one time. Another highlight is the working environment in the public television station where each host ever so politely fights for funding and airtime. Most of all I liked the thoughtful essays on gardening that accompanied most of the books.

The seventh book in the series takes place at Christmas in a Presidential election year. Louise is stressed, both her parents and her husband’s parents are coming to visit for the holidays. The couples have differing but strongly held views on politics. With the election just ended, there is still a lot to talk about and Louise is dreading the potential household conflict. In addition, the ratings for her gardening show have dropped because of the competition of a new face in the horticultural world. Bunny Bainfield with her English accent and skimpy outfits has quickly cornered the market on nursery centers and is trying to capture the gardening television scene as well as gardening books. No one and nothing seem safe from her predations.

The incoming First Lady, in an unusual pre-Inauguration move, is hosting a conference on native vegetal species just before Christmas and has invited horticulture authorities from academia, publishing, media, and commerce. The topic of native species is a controversial one, and it generates a good deal of heated discussion at the meeting. Bunny of course is in the middle of it all. Louise is appalled to discover that Bunny has been assigned to sit at her table during the formal dinner but she tries to be professional and courteous. The food has just been served when Bunny collapses after drinking from her wine glass.

There’s no question that she’s been poisoned. The police have a surplus of suspects, including Louise, any of whom could have dropped something into her glass as they walked by her table, and many of them with a strong motive. Bunny left a trail of enemies wherever she went. Louise as usual gets involved with the investigation, against the usual police admonishments to stay out of it. With all of the people who had justifiable grudges against Bunny, the actual culprit turned out to be quite a surprise. Good holiday reading fare.

I may have to give these a try! Is there really a cat or is it just cover shorthand for cozy mystery?