Review: The Sentinel: A Novel by Lee and Andrew Child 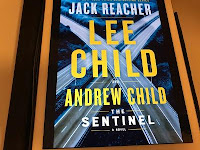 It has been several books since I read a Jack Reacher novel. For me, they had become entirely too predictable. Reacher drifts into town, finds a more than friendly local cop or waitress, cleans out the problem caused by entrenched locals, and moves out and on down the road. Names and places changed, but the basic premise did not. Just like twelve or more books later, the private detective still goes to the abandoned warehouse at 2 am without a weapon or self-awareness, Reacher had become far too predictable for me.

It also did not help that my reading speed and concentration has dipped markedly for the last three years. Not only have I not been able to resume my own writing, I simply don’t read as fast as I was used to and have a far harder time tracking a story from start to finish. Reading well enough to review is an increasingly rare phenomenon. I blame it on the grief though it just as easily could be related to a couple of my disabilities or some new medical freight train headed my way.

All that being said, thanks to Scott’s help, I was able to get my hands on the new novel in eBook form via my local library. I figured I would know soon enough if it was worth taking a look at. Within a few pages, it was clear that The Sentinel: A Novel by Lee Child and his brother, Andrew Child, (aka Andrew Grant) was a different Reacher novel.

It was also very good.

One week after Rusty Rutherford was fired from his job, Jack Reacher shows up in the small town roughly seventy-five miles northeast of Nashville, Tennessee. Rusty used to run the IT Department for the town. For all intents and purposes, he was the IT Department. Things have gone disastrously wrong. The town is now under a ransomware attack with critical services no longer working. The local citizenry now hates his guts.

Reacher knows none of this and wants nothing more than a cup of coffee and heads for the nearest coffee place he sees. As it happens, it is the morning haunt of Mr. Rusty Rutherford. Not only did he get a hostile reception in the place, Mr. Rutherford seems to be oblivious to the fact as he moves down the sidewalk that he is headed into an even more hostile reception. Rutherford being surrounded by several people in a carefully orchestrated plan. They are closing in on him. Clearly an abduction is planned as a car has moved into position at the mouth of the nearby alley. They have a good plan and their target is oblivious. It would have worked too if Reacher hadn’t decided to intervene.

He does and that sets off an intense seven days for Rutherford, Reacher, and numerous folks in this tale of espionage, the cold war, modern day computer technology, and a lot more. While Reacher is still Reacher, the tale is complicated and reads very differently from earlier books in the series. It also finds the spark that made the first books in the series so very good.

If you have not been around the series for a while, take a look at The Sentinel: A Novel by Lee and Andrew Child. I suspect you will be pleasantly surprised as it is well worth your time.

The Sentinel: A Novel