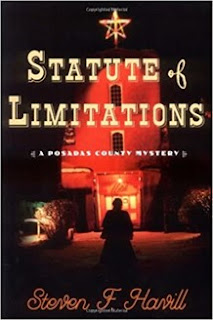 Steven Havill’s police procedural series set in fictional Posadas County, New Mexico, has been among my all-time favorite mysteries for years. I discovered the series early when its lead character was Undersheriff Bill Gastner. After nine books, Havill acknowledged Gastner’s advancing age and retired him, shifting the focus to Undersheriff Estelle Reyes-Guzman. Gastner remains a constant presence in the background, serving as unofficial advisor to his former employees and as official godfather to Guzman’s two sons.

The change in protagonist added a domestic thread to the narrative arc without sacrificing its detection emphasis, as Guzman juggled a full-time job with erratic hours and family responsibilities. The stories with Gastner, a widower whose grown children are scattered, were always centered on his work. The prequels that Havill has produced offer additional insight to Gastner’s earlier life but by and large the Gastner books are strictly about the crimes of the moment.

In Statute of Limitations (Minotaur, 2006) Guzman is settling in for a happy Christmas Eve with her family when a call comes in for her doctor husband that requires him to leave. A short time later she’s called out for what appears to be an attack on the retired village chief of police. A couple of hours later she and Sheriff Bob Torrez are taking down a pair of thugs in the church where her mother and aunt attended Christmas Eve mass only hours earlier. Christmas morning she awakens to the news Torrez has relapsed from the injuries he suffered in the fall and is being airlifted to Albuquerque. Christmas afternoon brings the discovery of a body in an arroyo and in the evening Guzman finds Bill Gastner prone on his doorstep with a head injury, resulting in a Christmas that is far from merry for county law enforcement.

Guzman spends as much time monitoring medical reports as she does fielding a dismayingly thin force to probe a homicide that appears to have no apparent reason. The methodical investigation that leads to a completely unexpected motive while maintaining daily operations is one of the hallmarks of these stories. The realistic map of Posadas County, showing the towns and villages with landmarks and various state roads referenced in the books, is a wonderful gift to the reader. Highly recommended series, especially for fans of police procedurals.

I do too. After I set this review up, I went looking with a hope a new one was inbound. No such luck.