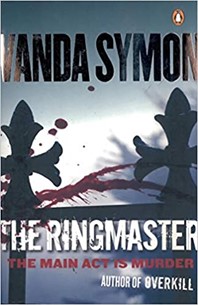 I won a box of books by New Zealand mystery authors at the St. Petersburg Bouchercon and have been reveling in its contents. It included the first three books by Vanda Symon, who is a crime writer and radio host from Dunedin, New Zealand, and the Chair of the Otago Southland Branch of the New Zealand Society of Authors. She has written five books about police detective Sam Shephard, the third and fourth of which were shortlisted for the Ngaio Marsh Award for Best Crime Novel.

The second book in the series is The Ringmaster (Penguin, 2008; reprinted by Orenda, 2019). Sam has transferred to Dunedin from her original assignment in Mataura, the reward of her work there being a fast-track promotion to detective constable. She and her best friend are snugly ensconced in spare bedrooms of the house owned by her best friend’s aunt and uncle, whose twin daughters have left for college. The aunt is a fantastic cook and the uncle a largely absent university professor.

Her living arrangements are the good news. On the job front, the detective inspector she annoyed in Mataura was also transferred and loses no opportunity to remind Sam he was opposed to her promotion. Others on the force wonder out loud just w0hat she did to deserve a boost up the ladder, and their answers to that question are not flattering. She does have a kind partner with whom she works well and she tries to focus on that.

When the body of a university student is found with her hands cuffed and severe head wounds, Sam’s boss makes a point to exclude her from the investigation by sending her off to deal with nuisance reports at the visiting circus. After evidence directs suspicion toward a circus employee, Sam is the only law enforcement representative to have gained the circus owner’s trust, and she is pushed to the front of the murder probe, much to the resentment of the DI.

The characters are possibly the best bit of this good police procedural, and that in no way is meant to diminish the freshness of the plot. Even the minor characters are drawn so fully as to be immensely credible. I could have done without the realistic depiction of the circus, which includes hardworking humans who don’t know any other way to live and poorly cared for animals that belong in a sanctuary somewhere. One scene there in particular is wrenching.

The resolution comes from out of nowhere, fans of fair-play stories will not appreciate the lack of clues, but the criminal reveal is quite well done with great suspense.