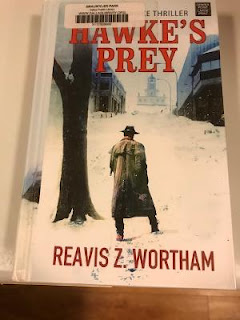 Unbeknownst to the good citizens of Ballard, Texas, as Hawke’s Prey: A Sonny Hawke Thriller by Reavis Z. Wortham begins, terrorists have crossed the nearby border and then violently through a nearby temporary border patrol checkpoint leaving bodies in their wake. While snowstorms and blizzards happen in this part of Southwest Texas, this one is a rare and massive super powered storm. The blizzard is not going to stop them from attacking and seizing the Presidio County Courthouse and taking those who survive the initial assault as hostages.

That includes Kelly Hawke, a teacher, and her civics class from the local school. That also means her own kids are also now held hostage with her and their fellow classmates in the occupied building. A legendary courthouse that is now occupied and full of innocent people, many terrorists, and a local legend in his own right, Sonny Hawke. The Texas Ranger is Kelly’s husband, father of their kids, and the only member of law enforcement in the building. The terrorists do not know that he is inside as he works to let Sheriff Ethan Armstrong know what is going on while doing recon and eliminating a terrorist or two along the way.

This book can pretty much be summed up as taking the concept for the movie Die Hard, making the setting a multilevel courthouse in far southwest Texas, make the terrorists homegrown and domestic with respective agendas, and let chaos ensue. This is a not a deep read nor is it intended to be as the thriller shifts among many points of view. Many of the characters are two dimensional and, as often happens, at least one of the on-site terrorist leaders is certifiably nuts. Of course, many of the foreign terrorists hate America for various sins while the home-grown ones seek to start a revolution that will, somehow, change America to what they believe were the good days back a couple of hundred years ago. This is billed as a thriller so one expects a lot of stereotypes and shallow characters as the focus is on constant action. 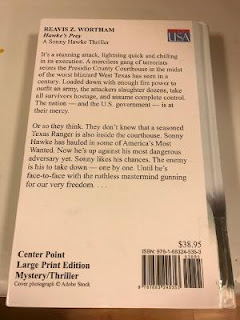 One is not disappointed in that as Hawke’s Prey: A Sonny Hawke Thriller by Reavis Z. Wortham powers along the violence increases and events spiral out of anyone’s realistic control. A plan is only good until first contact with the enemy and that point is taught repeatedly throughout the entire read.

A tad jingoistic and more than a bit simplistic, Hawke’s Prey: A Sonny Hawke Thriller by Reavis Z. Wortham, despite the negatives for this reader, is an entertaining read. Might make a great movie through Bruce Willis is a bit old now for Hawke. He could easily be Sheriff Ethan Armstrong who is hamstrung by the intense weather and a lack of resources as well as trying to keep the locals from excising their second amendment rights on their own. The next book in this series is Hawke’s War and I am on hold for it at the library.

For another take on the book, make sure you check out Aubrey Hamilton’s review from last August.

Material supplied by the Grauwyler Park Branch of the Dallas Public Library System.