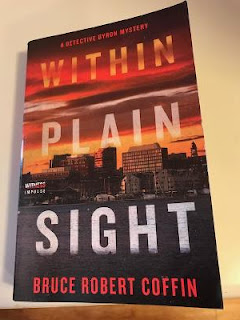 Portland, Maine has gone from the season of ice and snow in the last novel, Beyond the Truth, to the season of heat and great humidity in Within Plain Sight: A Detective Byron Mystery. It is middle of July in 2017 as the read by Bruce Robert Coffin begins and it is just after 5 in the morning when Police Detective Sergeant John Byron arrives on scene. As the lead homicide detective, it will be up to him and his team to identify the murder victim, identify the killer, and arrest the person or persons who did it. Clearly she met with foul play and clearly that event happened some unspecified time earlier at another location. A quick overview of the scene indicates to Detective Sergeant Byron they have little to go on as forensics are going to have to provide some avenues of inquiry.

It would really help the case if they also had her head.

Unfortunately, they only have her body that was dumped in the weeds of a long since derelict lumberyard. Specifically, the weeds and dirt inside an open-air drying shed, one of several such sheds and other decaying structures, on the long since abandoned property. Though it is not completely abandoned as a roving security guard found the body inside the fenced lot and called it in to the 911 system. Whether it is the work of a serial killer known as the “Horseman” who has been active over in the Boston area, a copycat of some type, or something entirely else is going to take time to determine. Time they don’t have once the media gets wind of the case and events begin to escalate in dangerous ways. 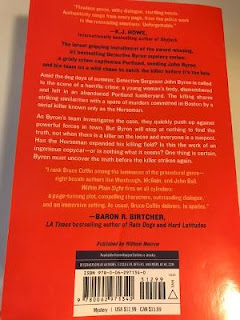 The fourth book in the series that started with Among the Shadows continues to build on that initial police procedural. While these are billed as mysteries, they only are in the sense that the criminal or criminals are not known to the reader or the team. These books are police procedurals and each one builds on the preceding read. Characters develop and change, even die, in this series as things are not at all static. Politics and the personal lives of a number of characters are interspersed with the complex cases, flashes of humor, and plenty of action. Each read is an intense one that delves deep into police work and the complexities and personal consequences of doing the job. Such is the case again here in Within Plain Sight: A Detective Byron Mystery. This book and the entire series are strongly recommended.

The series and my reviews:

Among the Shadows: A Detective Byron Mystery (April 2020)

Beneath the Depths: A Detective Byron Mystery (May 2020)

Beyond the Truth: A Detective Byron Mystery (December 2020)

Within Plain Sight: A Detective Byron Mystery (You Are Here)

My reading copy was a print edition from the author with no expectation of a review.