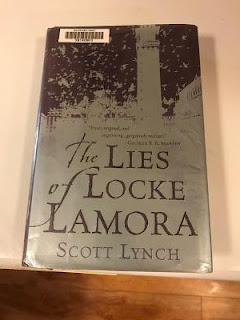 The Lies of Locke Lamora by Scott Lynch is the first book in the Gentleman Bastard Series. Locke Lamora leads the Gentleman Bastards, a group of conmen and thieves who target the rich in this fantasy novel. Raised by a blind priest named Chains, Locke Lamora he quickly became one of the best thieves in Camorr. He and his group are so famous they have become the target of someone more powerful who is killing off members of the criminal underworld and changing the balance of power.

This book is part origin story, part heist book, and part revenge tale. This book has incredible world building with characters of depth, along with plenty of humor and action. This dark tale is very detailed and one can tell the author spent a lot of time working on this debut novel.  Every important character in the novel is very different from any other character and their own personally unique way of saying things. The prose itself is a treat as it is used to detail settings and characters through the book. Each member of the Gentleman Bastards is likeable and different in their own ways. They all could have been the main character in a different novel. 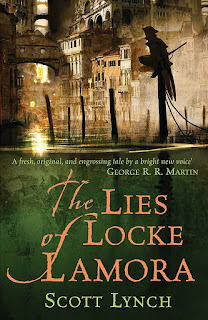 This book is a very mature and grim fantasy novel. This is a world that is clearly full of suffering and pain.  If one does not like stories where people die and there are consequences for one’s actions this is not for you. In this book, death is a constant companion with many people affected deeply by the death around them. Some characters do die while others wish they were dead so they did not witness some of the events of the book.

This book was a debut novel when it came out in 2006. There are two more in the series currently out and there are another four that are planned and advancing through the publishing pipeline. The second book in the series, Red Seas Under Red Skies is on my hold list at my local library branch.

The Lies of Locke Lamora by Scott Lynch is a really good novel set in an interesting world with a unique main character full of sarcasm and wit. Probably why I liked it so much as more than once it made me snicker out loud as I read it.

The Lies of Locke Lamora

Hardback (available in audio, eBook, and paperback formats as well)