Back in May 2019, Jeanne of the BPL introduced you to this series with her guest blog post here. She builds on that with her review today of fourth book of this series. 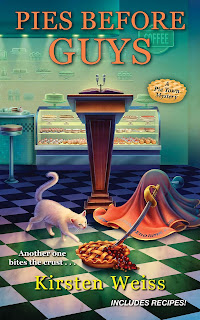 The number of murders connected to Val Harris’ Pie Town pie shop is one of the running gags in this fourth entry in the Pie Town series.    While Val protests, one of the participants in a poetry reading held at Pie Town is found, killed by the sword he was using as a prop during the reading.  Good thing Val’s boyfriend, police detective hunk Gordon, is being pretty calm about the whole thing—even about Val’s investigations into the death.  Is it possible he’s TOO calm about it? Is Val about to get dumped?  Will Charlene, pie crust maker extraordinaire, get them both hauled off to jail with her Pie Town UFOs? And by the way, who did murder the erstwhile poet?

Cozy mysteries these days seem to bank on eccentric characters, bizarre murders, and recipes (or craft instruction) and the Pie Town books fall right into this category on all counts.  Val is a plucky heroine with a sense of humor and a great deal of loyalty to her employees and friends.  Otherwise, she certainly wouldn’t put up with the stubborn Charlene who creates conspiracy theories as deftly as she turns out pie crusts.  How you view the series may depend on how you feel about Charlene; a friend gave up after 30 pages because she found the character so annoying.  I struggled, but finally decided to see her as funny.  She’s bull-headed but she’s also a tech savvy senior who knows how to use social media and is a huge Stargate fan.  She also has a white cat named Fred who sleeps a lot, even for a cat.  Charlene claims he has narcolepsy.

I’ve read the previous books in the series and enjoyed them.  I applaud the author for letting her characters change and grow, and for giving them some depth.  Sure, I get irritated with Charlene too, but in this book in particular Val’s insights made me cut them both some slack.  It helps that I now picture Charlene as a female Wilfred Brimley.

While a little background helps, I think a reader could come in at any point in the series.  I have to say that Charlene is easier to take after the first book but I’m still glad I read them all and in order.

The fifth book in the series just came out this summer, and I’ve made a note to check the local book store for a copy.

The books in order are:

The Quiche and the Dead