After you read here, make sure you head over to Patti Abbott’s blog as well as Aubrey Nye Hamilton’s blog and see what they suggest today.  Both ladies have a lot of reading recommendations, so I am sure if whatever is suggested for today will not work, something else they have talked about will.

FFB will return in the new year as the next two Fridays are holidays and you good folks are going to be busy with family and friends.  Take care of yourselves and have a fun and safe holiday season. 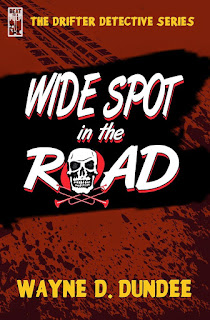 If the drifter detective, Jack Laramie, had blinked he might have missed the small “chili” sign in the window of Frenchy's as he passed by. After all there was only one vehicle in the parking lot and the place itself wasn't much to look at. Neither was anything around it at this wide spot in the road where an unpaved county road crossed the little used state highway. Just another wide spot in the road with this one located somewhere in the Texas panhandle. No reason to stop other than that sign for chili.

For Jack that sign was reason enough to stop. Jack loves his chili and prefers the variations one gets across the state in real places to eat as opposed to the cookie cutter chain joints he sees more and more. He has a lot of opportunity see things out on the road as, despite being based in Dallas, he is out there in his DeSoto pulling the horse trailer. The road is where he mainly earns his living as a private detective. It is early afternoon and he has been on the road quite awhile so by this point he realizes he is pretty hungry and that makes it a good idea to check out the chili served in Frenchy's of Beule’s Corner. 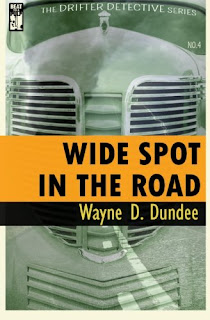 At first, just after Jack got out of the DeSoto and started for the door, the decision seems a bit questionable as there are some raised voices, some noise, and a man suddenly storms out of the diner and barely misses Jack. For his sake he does and with a few more fast steps jumps into his truck. He takes off at a high rate of speed headed down the isolated highway. According to the waitress, Bonnie, who also happens to be the niece of the owner, the guy who made a scene and took off is Alden Frain. Tipping furniture over and ripping the phone off the wall was not appreciated by Bonnie. He probably just ruined any chance he had with her of having a relationship. Tearing the phone off the wall was bad enough, but things are really going to go downhill when two very scared young adults arrive closely followed by a biker gang that wants payback.

Fourth in an excellent series that began with The Drifter Detective this installment by author Wayne D. Dundee is a good one. Recently published by Beat To A Pulp Press, Wide Spot In The Road is another great action oriented tale featuring the grandson of legendary lawman Cash Laramie. At the same time, readers also find out a little bit more about Jack and what keeps him on the roads of Texas working cases during the 50s. Keeping his grandfather’s memory alive with a gun and a talisman, Jack holds up the family name while trying to make sure good people aren't harmed by the bad guys. In this case, he might be a bit outnumbered. A book and a series very much worth your time. 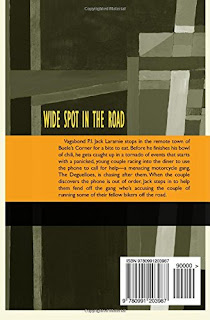