Earlier this week, my December 2016 review of Leviathan by Chuck Regan came up as a memory deal on Facebook. Even though this great book seems to only be available in print and by third party sellers, I decided to run my review today for FFB. It was/is a heck of a good read. Also make sure to check out the reads suggested today by Patti Abbott and Audrey Nye Hamilton. 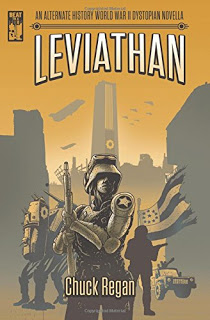 In an alternative world where Germany won the war and used a V-2 rocket or missile to destroy New York City with a nuclear weapon, Leviathan tells the tale of a few individuals in occupied America. In April of 1945, Norm Cromwell was in the sixth grade and on a field trip a little ways outside NYC when it was destroyed. He did not realize that he was seeing the rocket trail as the weapon came over the horizon and hit the city. His parents were back home in Pittsburg so they were not on the bus with him or the others in his group.

By October of 1962, Norm is an adult working and living in Philadelphia. One of the many adults crammed into a row house they live and work in an environment totally under German control. They are classified as “citizen workers” and have every second of their lives monitored. The Bundespolizei (BP) are the Gestapo of the Occupied America Branch of the Third Reich and they use informants and technology to control everyone and everything. Drone minizeps, shaped like small pigs and carrying cameras and other surveillance gear, monitor from the air while ground troops everywhere monitor things. Then there are the informants who may be friends and might be capable of lying just to get socks, extra rations, and other benefits.

There are resistance groups far beyond Philadelphia, according to rumor, but Norm has no plans to be a part of that. He tries to not think about his parents back home in Pittsburgh and has no idea if they are alive or dead. In a world where a smile can get you gunned down by the BP, Norm keeps his head down and does what he is told.

That is until at the end of the workday on this one particular day when all heck breaks loose. In the resulting melee Norm, Alan, and Floyd do something that is unforgivable. Forced to flee, they have no choice, but to go on the run to survive.

Author Chuck Ragan has created a very atmospheric and intense alternative history tale with Leviathan. As Mr. Regan makes clear in the introduction, the tale is designed off of several key changes to events during what we know as WW2. It isn’t meant to be a scholarly treatise on might have been. Instead, Leviathan is simply a pulp read of dystopian fiction set in an alternative history timeline. It is also very good.