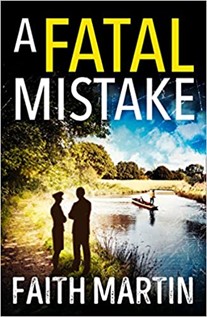 Faith Martin is a contemporary British author, who also writes under the names Maxine Barry, Joyce Cato, and Jessie Daniels. She lives in Oxford, where most of her books are set. Among her mysteries are the D.I. Hillary Greene series (18 titles), Jenny Starling series (7 titles), Monica Noble series (3 titles) and the Ryder and Loveday series (7 titles). She has also published 21 novels in romance and romantic suspense.

A Fatal Mistake (HarperCollins, 2018) is the second of the Ryder and Loveday series. The investigative duo of WPC Trudy Loveday and city coroner Dr Clement Ryder is Martin’s latest creation. Set in Oxford in 1960, this historical mystery takes the reader back to the time women were just beginning to find a place in the law enforcement field. WPC Trudy Loveday’s supervisor DI Harry Jennings and most of her colleagues greatly resent having her on the force, and she is finding her chosen career a hard slog.

Dr. Ryder is puzzled by the death of Derek Chadworth, a student of St Bede’s College, Oxford. He appears to have drowned when several punts full of students collided on the River Cherwell. However, Dr. Ryder can find no one who saw the victim in any of the punts before the incident. In addition, the students who were called to testify at the inquest all said virtually the same thing, as if they had been coached. Dr. Ryder is determined to look deeper into the death and requests the assistance of WPC Loveday for a few days. Jennings agrees reluctantly. The last time Ryder and Loveday teamed up, they solved a murder and gained recognition that Jennings wanted for himself. But Ryder knows Jennings’s supervisor well and Jennings is happy to have Loveday away from the police station, so off she goes.

Ryder and Loveday make a welcome departure from the usual crime-solving team. Loveday’s inexperience allows Ryder to give the reader information in the guise of coaching Loveday, which is a good technique that allows the story to keep moving. Nicely developed plot with plenty of suspects and red herrings. Written in the vein of traditional mysteries, think Patricia Wentworth and Agatha Christie, but not exactly cozy. There’s not much in character development and there’s no psychological drama here. This series will appeal to readers of British detective stories.