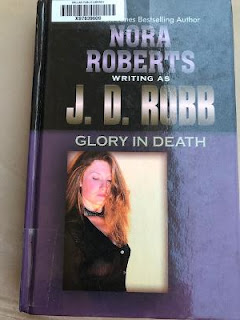 It has been a few months since Naked in Death and Lieutenant Eve Dallas is on the scene of another murder as Glory in Death. The year is 2058 and murder still happens in New York city despite genetic testing and catching those who might have hereditary traits predisposing them to violence. Guns are banned, but knives still work. Especially when used across the throat of the victim as in this case.

The dead woman was prosecuting attorney Cicely Towers. Her life ended on a street outside of a sex club and that same street is where her body lies as the rain comes down. Dressed for a meeting, she does not belong on this street at this time of night. Why she was there becomes soon evident though who did it and why remain elusive in the investigation.

A second murder is also clearly linked to the first no matter how others see it. Finding out the reasons why and the identity remain elusive as a media frenzy descends on the case. A media frenzy made worse by the fact that Lt. Dallas is dating one of the most famous men in the world, Roarke. Not just because of their romance, but the fact that Roarke was also well known to the victims as well as others connected to the case. 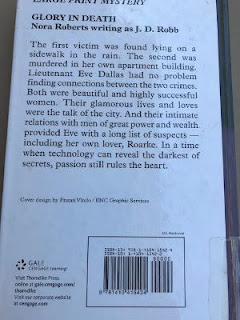 This second book in the series continues the turbulent romance between Dallas and Roarke as the police procedural moves forward. First and foremost, that is what this series is-- a police procedural. Decades in the future with all sorts of incredible technology, solving murder cases still comes down to shoes on the ground doing the legwork, asking questions in person, and catching suspects in lies.

The same issues detailed in my review of Naked in Death are very much present here. The constant shifting of pov, often in successive sentences in the same paragraph, continues unabated here throughout the entire novel. It can be a bit distracting until one gets in the flow of the story and the chase for love as well as a killer.

All in all, Glory in Death is a fun read and worth your time.

My copy from the Downtown Branch of the Dallas Public Library System.

I was waiting to see your review of the second book. I'm sorry POV bothers you, but I'm glad you're finding the books fun, Kevin.