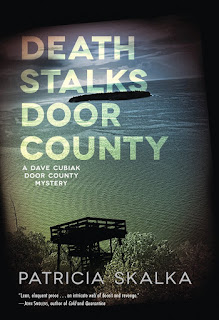 Death Stalks Door County: A Dave Cubiak Door County Mystery by Patricia Skalka is the first book in a multi book series. Published in 2004, author takes readers to the peninsula that juts out between Lake Michigan and Green Bay.

Dave Cubiak is a man living with incredible grief. His wife and daughter were killed and he knows that he is responsible for their deaths. Not directly, but indirectly, and that grief is all encompassing and wide ranging.

“He found it unsettling how quickly life returned to normal for those on the outskirts of loss. For a week after Lauren and Alexis died, he’d failed to pick up the morning newspapers from the front porch, not because he forgot but because everything commonplace seemed superfluous. His perspective had been so altered by death, he could not comprehend a world in which someone would continue to drop a daily paper at his door. He was only beginning to understand that for those not directly touched by it, death was a transient event (pages 60-61).”

The former Chicago homicide detective left the force and came up to the Door County to be a park ranger. He promised his former homicide partner he would give the job a year and he intends to uphold that promise despite the grief, the massive alcohol intake, and the ongoing annoying stupidity of others including his boss, Otto Johnson.

He wanted to leave death behind. At least, that was the plan. Then three months into the job, in late June, he hears a sharp wail nearby while out running one morning as he tried to flush the toxins from his system. He investigates and finds his boss, Park Superintendent Otto Johnson, at the  base of Falcon Tower. It appears that somebody took a header off the multistory fire watch tower. 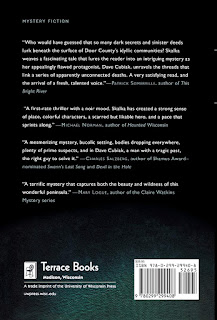 It soon becomes clear that the deceased is Lawrence Wisby. As Cubiak is forced to explain to his boss, Sheriff Halverson, and Doctor Bathard, the deceased is the brother of the man that killed his wife and daughter by driving drunk and running them down with a car. That makes him a suspect as far as the Sheriff is concerned.

An intense and highly atmospheric story, Death Stalks Door County: A Dave Cubiak Door County Mystery by Patricia Skalka is a complicated and often intense read. Grief plays a major role in the book almost to the point of an actual living and breathing character. Issues related to that aspect of the book leads to considerable backstory as well as a deep resonance with this reader. The ongoing current day mystery is complicated and far ranging and resulted in a considerable surprise when the killer was finally revealed.