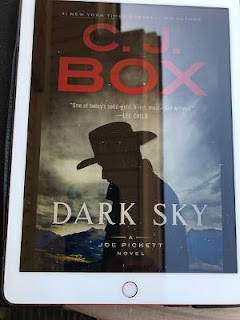 It was not a job that Wyoming Game Warden Joe Pickett wanted, but the Governor made it clear he had no choice. At fifty-one and doing a job for the most part he loves, he is very well aware that politics controls his career and his department. If he did not already know, a recent meeting with the newly elected Governor made that fact abundantly and bluntly clear in a recent meeting.

So, on this October morning with signs that winter is coming, Joe Pickett is at the Saddlestring Municipal Airport watching a Gulf Stream worth sixty-five million dollars power across the western sky above the Bighorn Mountains. It is a plane he is not looking forward to meeting and not just because standing there in the morning cold is not doing a lot for his still healing leg due to the events in Long Range. The rifle round ripped through his thigh and, while he is better and able to be back at work, he feels it when he stands in the cold or where he exerts that leg. He is also not wearing his gun, holster, or belt and he is keenly aware of the missing weight.

It is not long before the plane stops and the man he is supposed to take elk hunting comes down the stairway. Steven “Steve-2” Price, social media tech mogul, has arrived for his hunting experience. With him is his assistant, Timothy Joannides, and his bodyguard Zsolt, who treats Joe like he is a threat and not law enforcement. It is clear from the start that the three men have no business coming to Wyoming for an elk hunt and the trip is designed as a sort of publicity stunt. It is also clear that they will be treating Joe and his friend who is helping guide the trip, Brock Boedecker, as glorified servants to do their every whim.

The three from California, despite what Steve-2 says, are not there to really experience nature and fully participate in the elk hunt. Thanks to all their high-tech toys and unwillingness to actually help set up camp or do anything, they are there to be seen, by way of constant social media posts, to be seen on the hunt. While his daughters know about Steve-2 and use his sites, Game Warden Joe Pickett cares nothing about that.

Pickett’s plan is to get through the next few days as best as he can while hopefully accomplishing the main mission as outlined by the Governor. His job, as well as the jobs of many others is at stake, per the Governor's stated threat. A mission that would be difficult at best if things went right. It won’t because the five of them and their horses are not the only ones in the mountains.

Dark Sky: A Joe Pickett Novel by C. J. Box is the latest in this long running series and is a good one. Readers unfamiliar with the series could start here as the backstory is limited and does not impact previous reads. Readers long familiar with the series will find plenty to enjoy in this latest read that ends in a fittingly violent and intense resolution in the mountains of Wyoming. An ending that is also used, much like a billboard neon sign out by the highway, to tell one and all the focus of the next book in the series.

Material supplied by the good folks of the Dallas Library System. Big time thanks to Scott who was able to make the technology work for his old man.