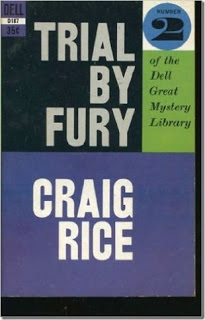 Wanting a break from the hurly-burly of Chicago, Jake and Helene Justus hie themselves off to Jackson, Wisconsin and the county courthouse, from which they want to obtain a fishing license. They haven’t been there very long when vacationus interruptus occurs in the form of ex-Senator Peveley being shot by a person unknown in what initially seems to be under impossible conditions since there are six people close by, all of whom are prominent local officials. None of them have seen the shooter—or so they claim.

The senator is the second murder victim in Jackson in thirty-two years. This complicates the inept and irascible Sheriff Marvin Kling’s life considerably, since it’s the first murder he’s ever had to investigate. It also complicates Jake’s life, because he and Helene are looked upon as strangers in small-town Jackson, and thus highly suspect. When the sheriff decides to hold them as material witnesses, Helene sends a telegram to their old friend, lawyer John J. Malone, in Chicago, tersely apprising him of their situation—especially Jake’s—and asking him to come help them. After an exchange of additional telegrams, some of the lawyer’s indicating reluctance, Malone finally agrees.

Three more murders, each committed in a different manner, occur. Is Jackson County dealing with one killer or four different ones?

Jake disappears. Is he on the run either from actual guilt, or simply to elude capture until the crimes are solved? Or has he been murdered or kidnapped?

It’s up to Malone to resolve matters and reveal the identity of the actual killer or killers.

I’m pretty sure that this was the first Craig Rice novel I ever read back in the Dark Ages of my teen years, when a cousin who learned I was enamored of detective novels gave me a copy. Since so many years had passed, I decided to reread it.

I can recommend Trial by Fury as an entertaining and reasonably well-paced whodunit, but I wouldn’t classify it as one of Craig Rice’s best. She was an exemplar of the screwball comedy school of mystery, but this particular novel, though it has its share of humorous dialogue, is not nearly as funny as other titles in the Malone/Justus series, where both dialogue and situations result in zanier scenes.

I LOVE Craig Rice! She was so cool!! I am so sorry she died so soon, never more to write our madcap mysteries.