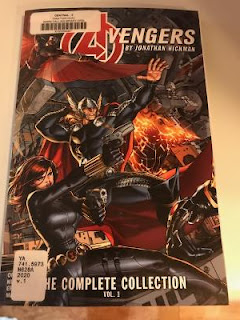 Avengers by Jonathan Hickman: The Complete Collection Vol.1 collects the first volumes of Jonathan Hickman run of Avengers and New Avengers. These titles are highly interconnected so having all the issues together makes reading easier. This is the first of several planned collected volumes to come. Hickman's run is widely considered one of the best runs of the Avengers ever. It is also well recognized to be one of the most complicated as it featured several new characters and new concepts while incorporating lots of existing and new backstory and history between characters.

This collection begins with a simple idea: things are getting worse, there are more threats coming, and the Avengers need to get bigger. After an attack on earth by powerful aliens the Avengers launch a counterattack on Mars against new foes. While battling on Mars, they learn of impending threats that could mean the end of life on Earth. Featuring Avengers such as Captain America, Wolverine, Thor, The Hulk and newcomers like Hyperion, Smasher and more. The strongest and biggest team of Avengers will face threats that endanger all life. 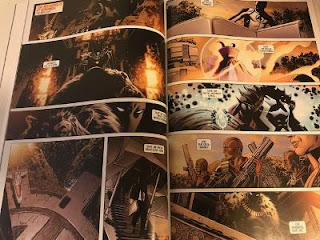 The focus shifts to the New Avengers in the second half of the book, where the secret group known as the Illuminati attempt to stop multiversal incursions (other Earths are colliding with this Earth) that could destroy it and the entire universe. What are they willing to do to survive? Are heroes like Black Panther, Mister Fantastic, Dr. Strange, Iron Man, and others willing to destroy another Earth if that's what it takes to survive? To save the people you love and to save yourself would you kill an entire world? 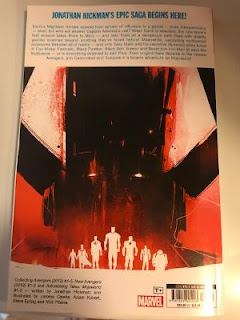 Featuring incredible art, epic battles, and deep ideas, Hickman’s run is awesome. Pretty much every character is written well and has memorable moments. It is a tale built on relationships between characters, big ideas, and deep concepts. The titles are interconnected in terms of timeline as well as several characters crossover between the different storylines.

I highly recommend Avengers by Jonathan Hickman: The Complete Collection Vol.1 for both new and old fans of the Avengers. There are so many ideas and characters that it might be difficult for some readers to follow. The read requires a lot of focus for the best experience, but the effort is very much worth it. 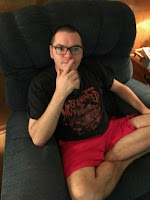