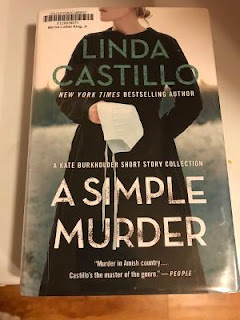 Five previously published short stories make up A Simple Murder: A Kate Burkholder Short Story Collection by Linda Castillo. Published in 2013 to 2019, each short story was released at that time as a marketing effort to draw attention to the new book that would soon follow. Such is the case here as there is a short excerpt from the upcoming novel, Fallen, which is to be released this summer.

The book opens with “Long Lost” published in 2013 when the romance between Kate Burkholder and John Tomasetti is new. Tomasetti is a state agent and Kate Burkholder is the Chief of Police of Painter's Mill, Ohio. They are their first weekend getaway about an hour from her home. They are at a bed-and-breakfast owned and operated by Harley and Fannie Hilty. They also soon become interested in the disappearance of Angela Blaine who vanished many years prior to their arrival.

Next is “A Hidden Secret” where a newborn is left in a laundry basket at the front door of the home of Bishop Troyer. Leaving the child wrapped in an Amish quilt and with an Amish rattle, as well as a being left on the Bishop's porch, all indications are is that the newborn is the hours old child of a local resident. After the baby is checked out at the local hospital and under care, Chief Burkholder needs to identify and locate the parents. Especially the mother who probably gave birth alone and may need urgent medical care.

Next up is “Seeds of Deception” which takes readers back to a time in Kate Burkholder's complicated childhood. As the tale begins, she is fourteen and her mom wants her to go pick apples with her older brother Jacob. She is already in trouble because her mom caught her reading a mystery novel the other night using a flashlight under the covers. it should have been a quiet and boring day at Zimmerman's orchard. It isn't at all.

It is a Friday evening in the spring and things are unusually quiet in “Only the Lucky.” Chief of Police Kate Burkholder had no idea that there is about to be a major party underway until local Amish farmer Aaron Yonder comes to tell her. She has known Aaron since they were kids and she knows that he does not come to see her easily. The fact that it is Friday the 13th does not help matters. Nor does a murder.

Before dawn wake up calls happen a lot in the novels and they happen here too “In Dark Company” where a four in the morning phone call gets things rolling for Chief of Police Kate Burkholder. A woman has arrived at a residence in the surrounding rural area. It is clear that she has been assaulted and she is terrified. What isn’t clear is who did it, what happened to her, and the identity of the suspect or suspects. The case is going to be difficult as the woman seems to have no memory of what happened and does not even know her name.

The final short story is the 2019 published, “In Plain Sight.” Orin Schlabach's dog would not be silent that morning. Jojo kept barking nearly nonstop at something out in the field. When the 78-year-old man got out there, he realized that Noah Kline is in the field unconscious and barely alive. It is a heck of a way to start a Sunday morning and Chief of Police Kate Burkholder is going to have her hands full. 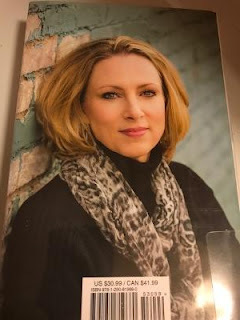 The book concludes with what is billed as Chapter 1 of Fallen. Unfortunately, it is a prologue and has nothing at all to really interest the reader as the short section is entirely too vague. The sis pages here could be applied to any book in this series or pretty much any mystery by any author anywhere. As a preview of the coming book, the section misses the mark massively and serves absolutely no purpose for the book that is coming out in early July.

All in all, the actual stories in this collection are good ones. For readers who are not already familiar with them, they are a nice slice of the Kate Burkholder world. They also serve as a nice introduction for readers unfamiliar with the world that began many years ago with Sworn to Silence. Whether, when each short story is about $1.99 or less on their own in eBook format, a hardback print collection priced at $30.99 makes sense, I leave it to the reader to determine.

For another look at the book, make sure to read Lesa Holstine’s review from last February here.