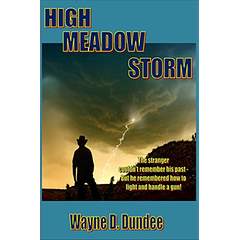 Waking up and having no idea where you are or your own name is not a good thing. At least folks found him at the R-Bar ranch and brought him into the small cabin three days ago. He’d been found up by the high meadow after a storm. Who he is and why he was there are just two of the many questions at work in this short story.

The ranch is run by teens and their far younger siblings after the death of their parents. Fever took them last winter, as it did many others, in the area. The twins are 8 and supervised by Addie who is almost 17 and her brother Heath, 18. Heath is the one who found the unconscious stranger and brought him to the cabin. The Rudisels are holding their own despite the efforts of nature and man to boot them off the land. With no idea who he is or where he should go, it becomes natural for the stranger to stay and get involved in their struggle in High Meadow Storm by Wayne D. Dundee.

As is frequently the case in Mr. Dundee’s westerns a major mystery is at work in this story. In fact, there are several mysteries in play in this enjoyable tale. Nominated for the 2016 Peacemaker Awards of the Western Fictioneers this tale that was originally published in Protectors 2: Heroes-Stories To Benefit Protect is now available as a standalone read. High Meadow Storm is also mighty good read as one would expect from Wayne D. Dundee.