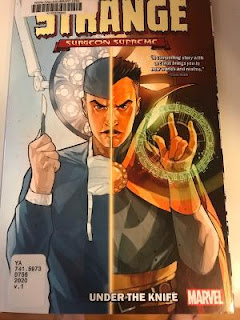 Dr. Strange Surgeon Supreme Volume 1: Under The Knife by Mark Waid and Illustrator Kevin Walker is the latest relaunch featuring Doctor Strange. Ever since the movie came out, Marvel keeps relaunching this series with a new premise and a new supporting cast. Over the years since the movie, Doctor Strange has gone through a lot by way of the various versions. He lost his magic, relearned his magic, went to space, became a veterinarian, had a ghost dog, and more. This is the first volume in a planned two volume series. I have enjoyed most of the previous series, but the constant change in direction and supporting casts is annoying.

In this read, Dr. Strange again has use of his hands and can again be a surgeon. He gained that ability by making a deal with a demon. He did that so that he could save the life of a child. To regain his ability, Dr. Strange agreed to do whatever is requested of him by the demon at some future point.  One hopes that will not entail going down to Georgia and fighting the devil for a golden fiddle. 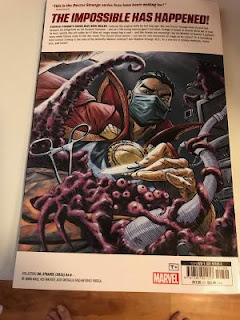 In the here and now, Dr. Strange is trying to balance the job of being an actual operating room surgeon with his ongoing job as the Sorcerer Supreme. This means he is frequently forced to choose which lives to save as he tries to balance two very different and demanding jobs. If that's not hard enough, there is a crossover link here with the series, Strange Academy by Skottie Young, where Strange is running a school that is like Hogwarts. Then there is the problem that somebody is giving bad guys magical weapons that could destroy reality. It should be clear that Dr. Strange has way too much on his plate.

While he is attempting to deal with all these jobs someone is arming people with magical weapons that could destroy reality. Doctor Druid returns and his working at the same hospital as Dr. Strange. Dr Druid is a former avenger who died came back as supervillain and now claims to have given up magic now. Can Dr. Strange trust his former ally who recently went evil?

Featuring plenty of high stakes, magic, and spectacular art keeps the reader entertained as Dr. Strange attempts to keep his jobs separate. There is also plenty of humor with Dr. Strange trying to interact with regular people. This is a good book for people who are fans of Dr. Strange and are looking for his latest fresh start.

My reading copy came from the Timberglen Branch of the Dallas Public Library System.