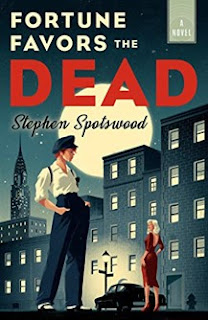 Fortune Favors the Dead (Doubleday, 2020) is the historical mystery debut from journalist and playwright Stephen Spotswood. First in the series, it opens with the meeting of famed private investigator Lillian Pentecost and circus performer Willowjean Parker in 1942, then flash forwards to November 1945 after Willowjean has become Lillian’s assistant.

The children of Alistair Collins, late president and CEO of Collins Steel and Manufacturing, enlist Lillian’s services to solve the murder of their mother Abigail Collins. The twins’ father committed suicide in September for no known reason. Their mother was murdered in the same room a few weeks later after a séance at a Halloween party. The séance was held by a “spiritual advisor” to whom Abigail had become devoted but who was viewed askance by the authorities. The party was well-attended with plenty of potential suspects but the police were stymied by the lack of evidence and motive. The lieutenant in charge of the investigation is not happy about Lillian’s involvement but realizes he could use her help.

Willowjean is the narrator and the reader learns what she is thinking and how she processes events while seeing only the actions of the other characters. Kirkus equates Lillian and Willowjean to Nero Wolfe and Archie Goodwin, and the comparison is apt. Their Fritz is a Mrs. Campbell from the Border Counties and the descriptions of her cooking are mouthwatering. Spotswood’s experience in dramatic development informs the pacing of the action which moves smoothly from one scene to the next. The characters are fully realized and quite human; they may be the strongest part of the story, as the actual mystery is so-so. The surprises continue after the unveiling of the murderer up to the last page.

A 21st century approach to gender issues is folded into the story line that I did not consider realistic for the time and place. I think this is part of the inconsistent use of period detail, which will be distracting to some readers. A sound story overall that bodes well for a series continuation.

Starred reviews from Bookpage and Publishers Weekly. The second book in the series is scheduled to be released in December 2021.