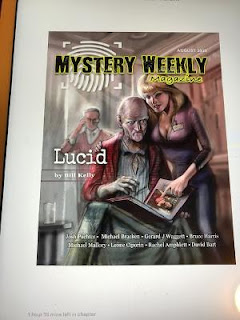 Mystery Weekly Magazine: August 2020 opens with “Lucid” by Bill Kelly. Lucy Pritchard, a twenty-eight-year-old grad student, has a plan to help Alzheimer’s patients. She wants to bring up older, lingering memories in the hopes of helping the elderly and those in their lives communicate better. Ted, the 45-year-old director of the Westwood Senior Center, is almost as lonely as the residents, so he is more than happy to let her try her experiments as long as she keeps coming back. She will do so as her real plan is going to take time and she needs Ted's help.

There is only one tiki bar in Haines, Alaska and it is called fittingly enough, Bamboo Room. Friends Sherilyn Crabtree and Ginny Krause are in the place to drink and catch up. Ginny is looking to change up her life through this might not be exactly what she had in mind in “The Odds Are Good.”

Sheriff Sherri Fine is spared listening any more to Senate candidate Clayton Holmes pontificate thanks to the radio call about a dead body out on Devil's Canyon Creek Road. Sheriff Fine has a complex case in “Bone Soup” by Michael Bracken. The human bones and maybe a few strands of hair are not going to be much help, but they will tell her enough to give her a starting point on a cold case going back years. Hopefully, this is not the last tale with Sheriff Fine as this was and is a really good read.

Mom always played a certain set of numbers in the lottery. Mom is deceased, but our narrator continues playing her numbers in “Suicide Insurance” by Gerard J. Waggett. He also has another plan to get some cash quick. Luck might be a lady, but she can also cruelly laugh and rip your heart out.

Being the mascot Chester the Shelter Dog is hot and very sweaty work at the Mansfield County Animal Shelter Furry Friends Festival. It is the first one ever as “The Power Of The Dog” by Leon Ciporin begins. The man with the gun might make this a onetime event for a number of folks. He has to be stopped.

“A Grave Mistake” by Rachel Amphlett comes next where Ben finds what appears to be a grave. Getting lost in the park was bad enough. Finding the grave is way worse. He has got to find his way back to where he parked and get out of there.

Attorney Scott Turley uses a flip phone so it takes him a while to find it. Part of the problem is that he has been drinking awhile in “Only The Desperate Come Here” by Michael Mallory. Carl Bone the third is the caller and he says he needs a lawyer because he killed a man. There is money to be made so Turley is looking forward to the case.

Wade Calvert is back home dealing with the trash and his past in “A Little House Cleaning” by David Bart. The farmer is dead, but Miram is still alive and hiding somewhere. He isn't the only one fed up and looking to settle things.

The You-Solve-It this month is “A Numbers game” by Bruce Harris. Winterball in January in Puerto Rico where a baseball player, Benny Tasby, is very much dead. The rookie phenom has had his head bashed in with a baseball bat. Naturally, several players resented him in various ways and that means they are all suspects.

The issue concludes with the answer to the July puzzle, “Poisoned Relationship” by Laird Long.

Another quality issue that showcases a wide variety in the mystery genre. While my personal favorite was Mr. Michael Bracken’s story, all the tales in the issue are solidly good. Interesting characters, interesting cases, there is something for every reader in the Mystery Weekly Magazine: August 2020.

So few of the authors are familiar to me anymore. The field has changed.

I know of some folks via SMFS when I was doing stuff there. And, yes, it has.