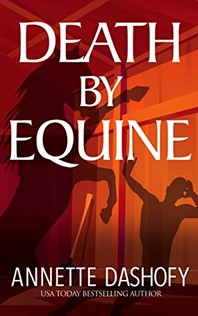 Annette Dashofy is known for her long-running series about Zoe Chambers, a paramedic and deputy coroner in rural Pennsylvania. Five of the ten books in the series have been nominated for an Agatha award, the award given for traditional and cozy mysteries at the annual Malice Domestic mystery conference. The next in the series is scheduled for release in 2022.

This year Dashofy offers her readers a stand-alone, Death by Equine (ISBN Services, 2021), still set in Pennsylvania in a different milieu but readers of her Zoe Chambers series will recognize similarities. Dr. Jessie Cameron is a veterinarian with a thriving clinic who is asked to backfill for her friend and mentor Dr. Sam Lewis, the veterinarian at a nearby small horse racetrack, while he takes his first vacation in years. Early in the morning on the day Lewis is supposed to leave, he takes a last call about a colicky horse and is trampled to death in the horse’s stall. Everyone supposes it was a horrible accident. The horse wasn’t known to be difficult but horses are much bigger than humans and can do a lot of damage without meaning to.

No one admits to being the person who called Doc to treat the horse, who does not appear to have colic. Jessie insists on sending the horse to the veterinary school at Ohio State University for a complete medical evaluation. The toxicology results showed the presence of acepromazine, a sedative that adversely affects the horse and that no one had any reason to administer. Jessie became convinced that Lewis was sent in to the distraught horse’s stall deliberately to be murdered, and she turns sleuth to get to the bottom of the mystery. Her soon-to-be ex-husband Gregg is a state trooper who resists her efforts to investigate.

Animals are not routine murder weapons in mysteries but they have been used that way before, such as in A Risky Way to Kill by Richard Lockridge (Lippincott, 1969). Getting the logistics around this kind of murder worked out takes some thought by the author, since it involves an unpredictable four-legged being; it is not as straightforward as pulling a trigger.

The behind-the-scenes look at the operational side of a racetrack is authoritative in its detail. The colorful minutiae provide a compelling setting for the action. It also justifies a wide range of characters: people trying to earn a living, some who love horses, and a few unsavory types looking for an easy score. Inevitably the latter are found anywhere money is involved, and horseracing is a multibillion-dollar industry. IBISWorld projects 2021 revenues for U.S. horse race tracks to be more than $3.5 billion. Readers of the Dick Francis books will recognize many of these personalities.

Of interest to cozy readers and fans of animal-themed mysteries.

Thank you for sharing.
www.rsrue.bloggspot.com