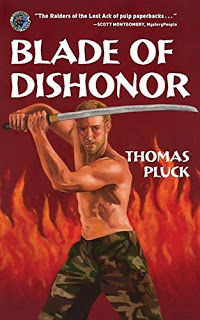 Reeves has come back home to Minnesota and the small town he grew up in to find the town has changed in many ways. The local Ford Plant has closed and the economic pain of that is just one of the things that continue to haunt the town. He has changed as well thanks to growing up and serving in the military though many folks don’t seem inclined to talk to him. The various ghosts of the past and shattered dreams haunt the town as well as Reeves and there are no easy answers for either.

Taken care of by Grandpa Butch, Reeves spent most of his life in the back of the local Army Navy store. It was there that Reeves developed a love for weapons--especially knives and swords. Butch is still alive and as angry as ever and isn’t about to let Reeves backslide into his old ways. He also isn’t about to let anyone else mess with him. That hardcore attitude towards family and the world will come in handy as Takehiko Yoshiro has come to buy the old store and all of its contents. A buying attempt that will lead to violence as some things, including honor, simply are never for sale in this martial arts thriller.

Throw in a beautiful babe, a fast car, martial arts, and an enduring love as well as a couple of other elements and Blade Of Dishonor by Thomas Pluck becomes a complicated ride into the past and present. Featuring twin storylines with Grandpa Butch struggling to survive during World War II and Reeves struggling to survive now, the read moves back and forth in time as the storylines merge together. Martial arts and the history of various groups in Japan are major components of this book that blends the past and the present in a way that ultimately results in Reeves fighting for everything he holds dear in a violent final confrontation half a world away in Japan. Officially World War II may be long over, but some of the factors that led into the war are still at work in this very good tale where honor means everything.

Material supplied by the author for my use in an objective review.