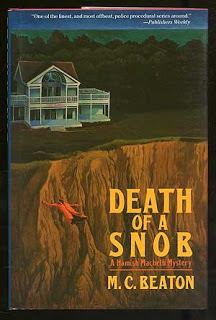 It’s Christmas in the Scottish Highlands and Hamish Macbeth, police constable of the village of Lochdubh, is miserable indoors with a head cold while a snowstorm rages outdoors. He’s equally miserable because he’s been looking forward to spending the holiday with his parents, who have “moved to a croft house and land near Rogart.” Other family members will be there as well, among them his Aunt Hannah—and there’s the rub. “Aunt Hannah,” you see, “was a fat-loud-mouthed harridan who loathed Hamish. But she had been generous to the not-too-comfortably-off Macbeths with presents of money and gifts for Hamish’s little brothers and sisters. Never anything for Hamish. She loathed him and never tired of saying so.”

“Ever since you put that mouse down her back when you were eight, she’s never been fond o’ you,” his mother reminds him, and Hamish understands that his attendance at the festivities, which will potentially prove remunerative for his parents, would be looked upon with less-than-sanguine eyes—especially Hannah’s. She is arriving on December 20th, so Hamish promises that if the head cold doesn’t kill him, he’ll drop off presents before then.

He’s barely back in bed when Priscilla Halburton-Smythe, “once the love of his life, until Hamish had grown heartily sick of the weight of the torch he was carrying for her,” shows up at his door. She’s there to ask that Hamish give some advice to her friend Jane Wetherby, and Hamish agrees to see Jane the following day. The tall attractive woman who shows up is wearing “a thin white blouse plunged at the front to a deep V” that she tends to emphasize, inadvertently or otherwise, by leaning forward when she speaks intently. She fears that someone might be trying to kill her. Her suspicion is based on a couple of potentially fatal accidents—or were they merely unfortunate incidents?—which have recently occurred. 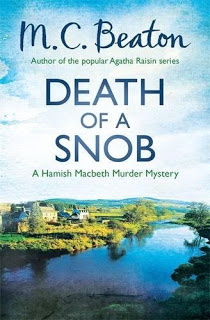 Jane is the proprietor of “a health farm called The Happy Wanderer on the island of Eileencraig….‘I not only teach people how to have a healthy body but how to get in touch with their innermost feelings.’” When she explains that a villager read her tea leaves and said someone was trying to kill her, she “began to worry about my guests.”

As you can easily imagine, Hamish becomes one of the guests.

The farm is closed for the winter, so the guests are friends Jane has invited to spend Christmas with her. They include two married couples, Jane’s ex-husband, and Harriet Shaw, a woman who writes cookbooks and to whom Hamish finds himself attracted despite their age difference. One of these people is the titular snob, and the others are among the suspects Hamish must contend with while also clashing with the local constabulary.

Death of a Snob is the sixth title in the Hamish Macbeth series but the first that I’ve read. I’m not sure I ever would have were it not for a longtime friend of mine who is an equally voracious reader, and who told me he’d enjoyed several titles in the series which—like this one—are short, quick, and diverting reads. M.C. Beaton excels at characterizations, particularly through dialogue, and atmosphere, especially when depicting the tensions among the Christmas guests at the health farm and the hostility of the Eileencraig islanders toward strangers. She’s also quite skilled at conveying a gentle kind of humor.

With the caveat that you avoid the epub edition I read as being obnoxiously riddled with typos and other problems in both narrative and dialogue, I can readily recommend it. Unfortunately, I can’t recall where I acquired this particular epub edition, so you’re on your own in that respect.