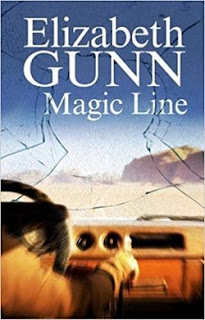 The Magic Line by Elizabeth Gunn (Severn House, 2012) is the fourth of the Sarah Burke contemporary police procedural series set in Tucson, Arizona. Gunn also created one of my all-time favorite fictional police detectives, Jake Hines of the Rutherford, Minnesota, police department. The Hines series seems to have stopped with 10 books. The seventh in the Burke series was published in 2020. Both series deserve a wider audience than they currently have.

Despite her plan for a quiet evening with her family in their new home, Sarah Burke is called out during dinner to a mass shooting in a quiet blue-collar neighborhood that appeared at first glance to be a home invasion gone wrong. A quick inspection revealed the house to be full of drugs and related paraphernalia. Five bodies and a significant number of weapons suggested a quick drug war with no winners. One of the victims wasn’t quite dead, however, so the police packed him into an ambulance for emergency treatment. In route to the hospital he managed to overpower the attendants and escape, adding another element of the unexpected to a crime that already didn’t quite look right.

Told from Sarah’s perspective and that of two of the criminals involved in the shooting, the story is a crisp portrayal of the law enforcement war on drugs along the United States/Mexico border and the kind of people who see it as a viable way to earn a living. The police investigation is balanced with quick looks at Sarah’s personal life, in which she, her live-in boyfriend and fellow detective Will Dietz, her mother recovering from a stroke, and her niece, abandoned by Sarah’s drug addict sister, have all recently become a blended family in a new-to-them larger house. This story is what fans of Gunn’s work have come to expect: a soundly plotted, well-written police procedural with interesting, credible characters. Highly recommended.