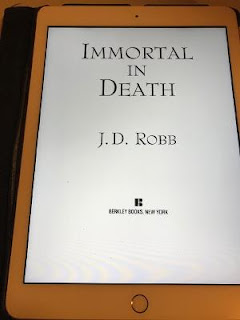 It is 2058 and marriage is on the menu as Immortal in Death by J.  D. Robb begins. Roarke asked her, she said yes, and now she is stressed about it. Marriage is complicated and Eve Dallas is worried about it. Thanks to her childhood, it is very hard for her to let her guard down or trust anyone else. Only a very few people are close to her and even they only get glimpses of the real Eve Dallas.

One of those few people in her inner circle is Mavis. An entertainer, Mavis is everything Eve is not. Flamboyant, loud, and brash in so many ways, Mavis knows people and has quite a few contacts and friends. One of those is a designer who is going to handle her wedding dress. Not only does Dallas meet Leonardo, she also meets Pandora, a model, who saw Eve and thought she was there for other reasons.

Not only does she assault Eve, she goes after Mavis. When the dust settles, Pandora threatens to end the career of the designer, Mavis, and pretty much everyone in sight before she leaves. It is no surprise when hours later, Pandora is dead and Mavis is suspect number one and soon arrested.

Despite the evidence forcing the arrest, NYPD Homicide Lieutenant Eve Dallas is sure that Mavis did not kill Pandora. Some of the other potential initial suspects she is not sure about. That list of possibilities seemingly grows exponentially while at the same time, the evidence continues to point to Mavis. In the following days as a media frenzy breaks out and Dallas’ professionalism is questioned by many, her long buried childhood memories begin to unlock adding to her stress. 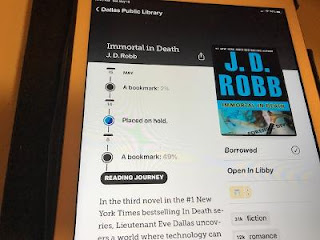 There is still the wedding and the mounting stress of that as well.

This third book in the series is another enjoyable police procedural/romance read. The author’s ongoing habit of pov head hoping continues what seems to be a default style. Despite that fact, the read is entertaining and moves as at a rapid pace as we learn more and more about Eve Dallas and what drives her. 2058 has a lot of cool high-tech stuff, but humans are still present, and murder still happens for the same reasons it has going back to the first time one of our ancient ancestors decided to whack somebody else.

The books to this point and my reviews:

My copy came via the LibbyApp from the Dallas Public Library System.