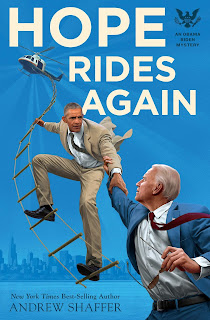 Please welcome Jeanne of the BPL back to the blog…

Yes, you read that right:  this is a mystery where the sleuths are the former president and vice-president of the United States.  And if reading that makes you skeptical, join the club.  I thought the idea was ridiculous.

Then someone talked me into reading the first book, Hope Never Dies, because it was very funny.  I needed funny at the time, so I gave it a try and nearly fell off the treadmill laughing a couple of times.  Sure, the concept is over the top but really no more so than having a baker solve all the murders in a small town (which has a LOT of murders!) or other series in which Jane Austen, Edgar Allan Poe, or Eleanor Roosevelt catch the criminals.

The stories are narrated by Joe Biden, who is portrayed as being somewhat inept (his smartphone baffles him at times, for instance) but who is passionate about justice, America, and looking out for each other.  He’s an all-around decent guy who may not have all the answers but you know he’ll have your back.  Barack Obama is the cool guy, the professor, the one who wants to stop and take stock before Joe rushes in.

As the second book opens, Joe is mulling whether or not to run for president.  Since the book came out in July, 2019, Shaffer had to walk the fine line of “will he-won’t he” in Biden’s musings.  Biden is in Obama’s home town of Chicago for an economics forum, and traffic is terrible.  It’s St. Patrick’s Day weekend and the celebrations have already started, so that when Biden gets out of the cab to walk he smells the odors of corned beef, cabbage, and horse manure which made him “nostalgic for the Senate Chambers in August in the seventies” before the advent of air conditioning.

It isn’t long before there’s the murder of someone Joe met and liked, and he isn’t sure that Mayor Rahm Emanuel is going to see that the investigation gets the attention it deserves. So Joe is going to take the case himself, with a little help from the guy in the tan suit.

Others have disagreed, I’ll admit.  And maybe it’s more due to really REALLY needing something funny at the time I picked up Hope Rides Again but it seemed to me there was something to laugh at on every page.  I like Shaffer’s sense of humor and the way he portrays the “bro-mance” between Biden and Obama and the way their wives are always bemusedly a step ahead of them. And trailing in their wake is hapless Secret Service agent Steve, who has to be a glutton for punishment.

I don’t suppose there’ll be a third now but if there is, I’ll be reading it.