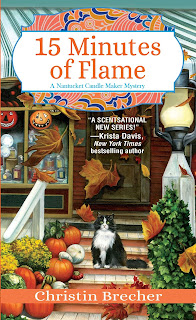 Please welcome Jeanne of the BPL back to the blog….

Nantucket candle maker Stella Wright is excited about the upcoming Halloween fundraiser for the town.  A friend has inherited a house with an old stone building in the back which has apparently been left unused for years—so long no one seems to remember what it was used for, though probably it was a work shed.  It will make the perfect setting for a Halloween stop.

It turns out it may be a little more perfect than expected when a woman’s skeleton is discovered hidden behind a hearth in the shed.  Wearing a Quaker style outfit, this is obviously not a recent death but as Stella delves into the history of the area she finds the past can still have deadly consequences in the present.

This is my first Nantucket Candlemaker Mystery and I did enjoy it, mainly because the author did play with expectations a bit.  Clues were given which seemed to lead in one specific direction but then did veer off.  The characters were well done and interesting enough for me to want to read more about them.  I will be interested to see how some relationships play out. While I had some qualms about some of Stella’s investigations, she wasn’t a totally reckless risk taker.

I like a strong sense of place in a story, and this one did that admirably, using the area’s history and geography to good advantage.  The interior of a well figures prominently in some sections and the descriptions there were particularly vivid, but I also could envision the workshop shed and the house interiors.

And since the avocation/hobby of the series is candle making, there are some tips provided.  Much revolves around scent, though some molding and shaping shows up.  Since going into candle shops (or other heavily scented places) gives me a headache in short order, I merrily skipped those parts.

At present I don’t see another series entry poised to be published, though I would certainly read another.  As for the previous books, I may pick them up at some point.  The author rather caught us up on backstory so I don’t feel a strong need to read those. (Translation: she identified suspects and victims from at least one previous murder so I do know who didn’t do it.) On the other hand, I did like the characters and setting, so if one came my way I might just read it.

The books in the series are: