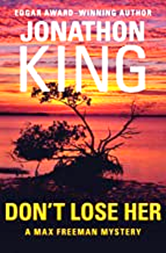 Diane Manchester, a Federal judge and eight months pregnant, is forced into a van as she walks down the street in Palm Beach, on break from the courtroom where she is presiding over an extradition case involving a Colombian drug lord. Her terrified husband Billy calls in Freeman, who conducts investigations for Billy’s law practice. Freeman launches his own search, leaving the obvious avenues to the FBI and believing the defendant of the judge’s current case is behind her kidnapping. His first stop is at Billy’s bank, where he retrieves $100,000 in cash to use as bribes for informants who won’t talk to the FBI. His hunt takes him into the underside of southern Florida society, where poverty and drug addiction and those that exploit its victims are the norm.

Three story lines offer multiple perspectives on the action-- Freeman, the judge, and a young woman pulled into the crime -- and then converge in the heart of the Everglades. A fast-moving, intense thriller with a strong sense of place and a suspense-filled finale. The descriptive passages about the Everglades are striking. It’s clear King knows this region well. Highly recommended.

I always loved King's descriptions of the Everglades. If anyone could make you feel hot and humid, and experience the creepy overtones of the isolation there, he could.