Scott's Take: The Kingdom of Liars: A Novel by Nick Martell 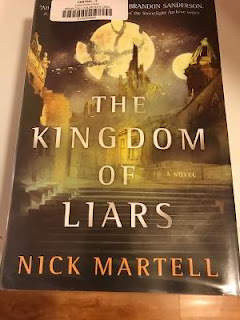 The Kingdom of Liars: A Novel by Nick Martell is the author's debut book and stars Michael Kingsman. That matters because he is the son of David Kingsman, the murderer of the King's nine-year-old son. Dad is dead and considered by nearly everyone to be a murderer and a traitor to the Hollows (a city state in this fictional world). The nobility that rules the Hollows are at war with each other as well as the Rebels who seek to overthrow the nobility and usurp the King. Not only has the King done a terrible job of leading his country, the death has set off a battle with the remaining children who want the throne as well as other members of royal families who believe they now have an opportunity to claim it. The King’s most likely heir is commonly called the Corrupt Prince for his hedonistic and sadistic behavior. The common folk, as they are everywhere, are stuck between all these warring factions who do not care about who they hurt, maim, and kill.

In this world, magic is a rare gift that is tightly controlled by the nobility. To use it, you will lose something of your memory. It might be a little memory or it might be your own name. The nobility uses magic as a weapon as the people do not have access to magic. Magic is great until somebody puts a bullet in your head and the people have plenty of guns. 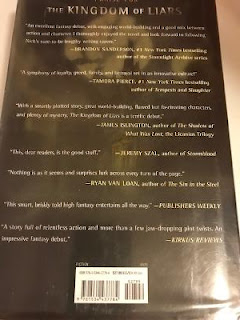 Michael Kingsman is determined to protect his family and uncover the truth about his father's crimes. Did he really kill the king's son or was he framed? To find out, he needs to work his way into the ranks of the nobility to have any chance of finding out anything. He has to try, despite the fact they all hate him for apparently good reason, as well as the fact that he has gaps in his memory going back to events in his childhood. Those gaps could hold clues to what really happened. If his mind was altered, how can he trust himself or figure out what the truth is?

The supporting cast in The Kingdom of Liars: A Novel by Nick Martell is very diverse and different. Everyone has realistic motivations and evolves throughout the novel. Michael Kingsman is complicated and makes clever decisions at times and at other times makes decisions based on emotion that may or may not be the right one.

While the author does tend to lean into cliches at points, overall, this debut novel is very good. This very good read is followed by The Two-Faced Queen. That came out earlier this year and remains on order by the Dallas Public Library System. I have a hold for a copy when it finally arrives.

The Kingdom of Liars: A Novel