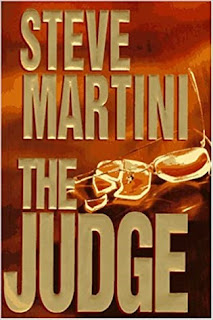 After an overwhelming several days watching events at home and abroad, I wanted an absorbing story that would engage my attention; I found it in one of Steve Martini’s early legal thrillers. Martini started his career in journalism, where he reported on legal issues in the California State Capitol. He then attended law school and undertook a varied private practice. He began fiction writing in the mid-1980s, publishing three stand-alone novels and 14 books and a novella in his Paul Madriani series. A fifteenth full-length book was published in 2017, according to Fantastic Fiction; it is labelled unavailable on Amazon, with only one review. His website does not list this last title. Apparently it was not actually released.

The fourth book about Madriani is The Judge (Putnam, 1996); it is nearly perfect. At the request of a friend Madriani takes a police officer under investigation as a client. Authorities believe San Francisco police union officials have been skimming funds, and the judge in charge of the grand jury is leaning hard on Madriani’s client to testify. In an opening scene Judge Armando Acosta tells Madriani that his client can turn his buddies in or go to jail. Madriani knows a police officer will not survive in jail, even for the two or three days it would take to overturn the judge’s ruling.

The question whether to testify is quickly rendered moot when the judge is arrested for soliciting a prostitute. The prostitute is an undercover part-time agent of the SFPD Vice squad; the situation reeks of a set-up. In a sequence of events so unlikely that they could really happen, Madriani gets pulled in as the defense attorney for the judge who was threatening him just days before. Within a couple of days, the undercover agent is found dead in a dumpster. The judge can’t provide an alibi, and Madriani quickly has a capital murder charge to defend instead of a misdemeanor.

Martini’s dialog, pacing, and plotting shine in a courtroom setting, and that’s where most of this book takes place. Devious cross-examination of prospective jurors, smart deflection of the prosecuting attorney, and clever questioning of forensic experts show Martini’s expertise in the trial venue. I particularly enjoyed Madriani’s wry and witty internal commentary throughout. The culmination does not take place in the courtroom; instead there’s a great chase scene with a completely unexpected culprit. Not surprisingly the book was turned into a miniseries. It aired on NBC in May 2001 with Chris Noth as Madriani and Edward Olmos as Judge Acosta. This story is highly recommended, especially for fans of legal thrillers.