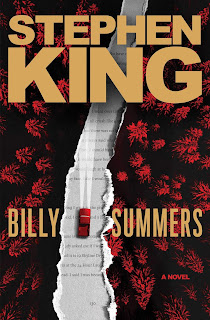 Former Marine sniper who served in the Iraq war, Billy Summers is a hit man with a conscience. Hired by Las Vegas mob boss Nick Majarian, for whom he's done jobs in the past, Billy thinks this latest might be his last based on the payment offered: two million dollars, with half a million up front, the remainder when the job is done.

The target is one Joel Allen, whose execution by Billy depends upon when and if he's extradited to the small southern city of Red Bluff from California. Billy must thus establish himself in the city and surrounding suburbs using fake identities, one of which is as David Lockridge, writer working on a novel he won't talk about lest he talk it out and thus fail to actually write it. In a different area near the city, he rents a basement apartment under the name Dalton Smith. 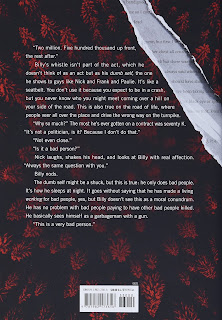 In addition to becoming friendly with occupants of the building he "works" in, the building from which, if things go as planned and hoped, he'll fire the fatal shot and then disappear, Billy also becomes friendly with his suburban neighbors. He knows from long experience and caution that getting too close to anyone is potentially dangerous to him, but this particular job rather demands more than casual proximity. It might also bring regret.

When he rescues Alice Maxwell, a woman half his age, he knows instinctively that his life will never be the same. (No, I won't explain and thus spoil the nature of the rescue and/or its consequences.) He knows on the one hand that he shouldn't have meddled, knows on the other that he couldn't have not done so.

Beyond reporting that Billy had a gut suspicion that things probably wouldn't proceed as he'd been told they'd planned, and that those he'd trusted can't be relied on, which "revelation" will not surprise astute readers, I won't go further lest I insult anyone who has read this far. Suffice it to say that Billy Summers is a gem of a page-turner, revenge story, and an engrossing character study.

Nice review of a book I've been considering since it came out. What you had to say about the character increased my interest. I like complicated, unpredictable people in the stories I read. I just wish the Kindle price wasn't so high.

A lot of the Kindle pricing is just insane. I am on the hold list at the library for it.