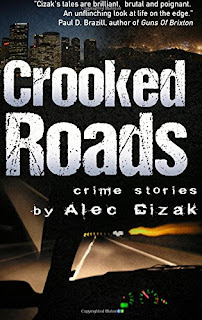 Published in 2015 by All Due Respect Books, Crooked Roads: Crime Stories by Alec Cizak features fifteen previously published short stories. Published in print and online the tales reflect flawed characters, crimes of various types, and situations where there are no easy answers.

“The Space Between” starts readers off with a very short tale about the relationship, as well as the lack of one, between the cashier and the customer. She spoke in clichés, but for the narrator, his life is also full of clichés.

The guy known as “Bump” had never seen somebody die until Kristos put the shotgun deep into Hector’s mouth and pulled the trigger. Now it is supposed to be Bump’s turn to kill in “Columbus Day.” All that was supposed to happen was the three of them, if you counted in Sophia who is about as crazy as Kristos, were to bust into a cook house, grab the latest batch, and go back home to watch The Vikings on Monday Night Football. At least, that had been the plan just a couple of hours ago.

Dad always said to never underestimate just how stupid some folks can be and then proved it himself. Living in a trailer park, Neptune Park, isn’t that great. He knows his girlfriend’s dad, Mr. Vaughn, is not happy at all that he is intimate with his daughter, Missy. Sure, she might be working out her issues, but Dwayne likes her a lot and knows the score in “No Hard Feelings.”

It is January and the rains have come to Wilshire Boulevard. For Rex Burris, who relies on the generosity of others, the rains are a bad thing because folks don’t give when it rains. In “American Chivalry” Rex has a plan for the Korean wives on the 20 bus if he can get enough space change to get on the bus in the first place.

The short Mexican is in the wrong place at the wrong time. Though he doesn’t know it yet as “Dumb Shit” begins. Donny and his friend, Smitty, lost their roofing jobs to Mexican workers that worked far cheaper for the contractor, Jimbo Pincer. Donny is mad at everyone in the world. It never is a good thing when Donny is mad.

She’s alone, drinking, and has a .32 in her purse. She also has a story to tell in “Spare Change.” 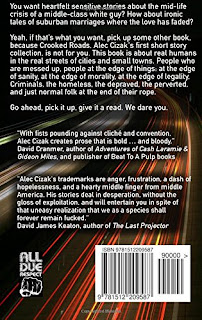 Bud Gorski has a wife he can’t make happy and a night job at Liberty Steel that does not pay enough. The strike has not helped things at all. Ron feels bad for him in “State Road 53” though he does not feel bad enough to stop seeing Bud’s wife, Lynn.

Stan Dillon does not normally go for blondes and then she walked into the bar. As a cop, he knows a hooker when he sees one. In “Patience,” the hooker of the same name has a friend, Finesse, and a place, if he is willing. Off duty and male, he is definitely willing to go with her to the Ramada on Wilshire.

The two guys that are friends of Katy’s dad showed up wearing ski masks. They gave her a blindfold and put her in their car. She wanted to see Billy get his in “Katy Too.”

“My Kind Of Town” features Jenna and Tom who have a plan for their future. Tom’s wife Maggie is not part of that plan. Neither is his gas station.

Enrique Paz has been trailing the guy on foot for a while now in “A Matter Of Time.” Paz was supposed to be meeting a couple of white guys from West Hollywood to sell them some meth before this guy earned his attention. The fact went he into a church isn’t going to save him.

Debbie had seemed fine when she left after having drugs and sex with Ethan though she did not tell him where she was going. In “Methamphetamine And A Shotgun” Ethan has decided to go outside and see the day. He has also decided it is a good idea to take his shotgun.

She needs a payphone and that has proved to be a bit of a problem in “Little People.” She could use her cellphone, but that would create a record. A record of the call could link her to the guy in the trunk of her silver Lexus.

Harold showed up early at Nicole’s place in “A Moral Majority.” He has a problem and a sin to confess. If the congregation finds out, they won’t be happy. He needs advice and a solution to a terrible problem he has created.

“The Ralphs At Third And Vermont” used to exist before the riots. It burned. What happened to Charlie, who used to carry folks groceries, is the point of this tale that shifts back and forth in time.

The tales in Crooked Roads: Crime Stories are all good ones. These previously published stories feature a range of characters, emotions, and situations that create a dark atmosphere full of vengeance and violence. Nothing is simple in these tales whether it is the plan for survival, the reason for the situation, or the actions by anyone involved. Published by All Due Respect Books, the short stories contained in Crooked Roads: Crime Stories by Alec Cizak live up the title and then some. In a number of cases, the road is not just crooked, but pulverized into sharp channels that rip your soul.

All Due Respect Books

Material was purchased in August 2015 to read and review by way of funds in my Amazon Associate account.