Review: Murder at the Jubilee Rally: A Samuel Craddock Mystery by Terry Shames 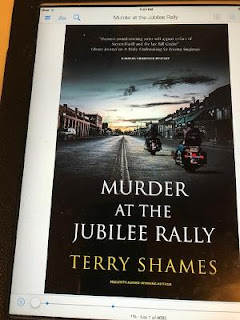 Murder at the Jubilee Rally: A Samuel Craddock Mystery by Terry Shames opens with many of the locals less than thrilled with the coming event featuring motorcycle folks from all over. Some want the entire town closed for business during the Jubilee Motorcycle Rally. They want to force those attending to go over to Bobtail, another small town about ten miles away, to do their shopping. The theory being shutting down everything will keep the bikes and their noise out of the town.

Of course, the small business folks who need the money from the out of towners hate the idea as do the locals who do not want to be inconvenienced. Folks are very heated on both sides of the issue. The town meeting causes some folks to say things that would have been better left unsaid. Thanks to Police Chief Samuel Craddock and a couple of others, a compromise is worked out, where some businesses have an early curfew while others do not.

Soon the rally is underway, the compromise is working well, and things at the rally which draws hundreds of folks from all over the state of Texas and beyond are going okay. That is until a murder happens.

A murder that makes things way more complicated as Craddock and his team have been trying to keep things calm at the rally and in town. Not that ever having a murder is a good thing, but the timing right now is really bad, and not just because of the local event.

Craddock is also dealing with a serious family problem as his niece Hailey is giving her parents fits. The little girl he remembers is not the child she was if her parents are right about everything that is going on with her. The teen years can be ugly and things are ugly. Sixteen and acting out with alcohol, possibly using drugs, and sneaking out to see an older guy are just part of it. She is acting up at school too and her grades are falling. Things are so bad her parents are thinking of sending her to a boarding school for troubled kids.

Hailey and Samuel used to get along pretty well and she liked to watch the cows Samuel has and spend time with him. He offers for her to come stay a few days to give everyone a break. Samuel believes that if things get difficult, he can get advice and help from his lady friend, Wendy, as she has raised two girls and survived the teen wars. Before long, Hailey is in the house. The bad thing is, trouble in more than one form, followed her from Austin.

Between the murder of a local business owner, Hailey’s antics, and other things, there is no rest for a good lawman. Samuel Craddock and his patience is put to the test constantly through this read. Drama and trouble, on and off the job, power Murder at the Jubilee Rally: A Samuel Craddock Mystery by Terry Shames as does the summer time Texas heat and humidity.

If you have not acquainted yourself with the series, you should, and you could safely start here as references to prior events/books are limited. If you are a reader of the series that began long ago with A Killing at Cotton Hill: A Samuel Craddock Mystery then you know you are in for another fun read as author Terry Shames does not disappoint with Murder at the Jubilee Rally: A Samuel Craddock Mystery.

While the book is not scheduled to be released by Severn House until October 4, 2022, I was able to read it now thanks to a digital ARC from them through NetGalley.

Thank you for your spoiler-free, excellent review, Kevin. I hope readers enjoy reading about Hailey as much as I enjoyed writing about her.

Very much enjoyed the read. Having raised two boys, I know nothing about raising teen daughters other than what I have heard from others over the years. Heard quite a few horror stories. lol

Since I already read the book, like Terry I could tell it was a spoiler-free review. Terrific series, isn't it, Kevin? It was good to catch up with Samuel Craddock again.

It was awesome to catch up again. I don't think I ever said this before, but her books were ones I used to read to Sandi when she was in her fight. She liked them a lot, but as her eyesight changed from everything, she could not see the print that well. So, she listened and I read. it became a known deal at Medical City Hospital and several of the nurses would come by and hang out for a little while and listen.

What a nice story, Kevin. I like those books a lot, and I can see why Sandi and the nurses both wanted to listen.

Kevin, that's beautiful and heartbreaking. I hope it gave Sandi some enjoyment.

It did, Terry. It truly did. You, Bill Crider, and Earl Staggs were her favorites.