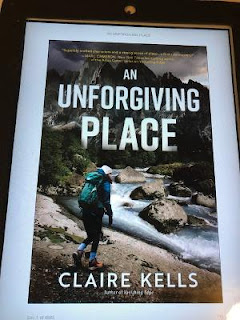 An Unforgiving Place: A National Park Mystery by Claire Kells picks up a few weeks after Vanishing Edge. On assignment in Denali National Park, Investigative Service Branch Special Agent Felicity Harland is sent to the Gates of the Artic National Park to investigate the discovery of two bodies. Search and rescue is active in another part of the park looking for two hikers that have been missing almost a month. Timothy and Kelsey Greer might be the deceased or they might still be alive and lost in the vast wilderness.

Before long Special Agents Felicity Harland and Ferdinand Huxley (who has made the jump to ISB from being a Park Ranger and is being pulled from doing training modules- much to his relief) are at the scene of the two bodies. Unlike in most cases, there has been little involvement by animals. No obvious cause of death and no signs of defensive wounds. It is clear that they are dead, but the signs of what caused it are not clear. There are also clear indications that something strange was going on before they died. One example are the faint marks on the wrists on both bodies that indicate some sort of ligatures were used on them in recent days.

Harland and Huxley are on the case and soon forced to work undercover to ferret out the truth. Humans are one threat. Nature itself is another. Either can kill you dead if you let your guard down.

A worthy and enjoyable sequel to Vanishing Edge, much is going on in this complicated and action filled read. Events and backstory regarding the first book come up here. Quite a lot from book one is referenced, so it is strongly recommended that readers start with Vanishing Edge first. You will enjoy this very good sequel a lot more if you do so.

While An Unforgiving Place: A National Park Mystery by Claire Kells is currently scheduled to be released on November 8th, I was able to read it now thanks to a digital ARC from Severn House via NetGalley.