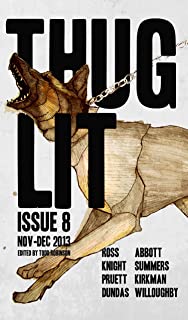 After the positive response last week, I thought I would crack open the magnificently massive archive and remind you of yet another Thuglit issue today.

Thuglit: Issue 8 is the latest installment of the series and another hard hitting anthology of eight stories that portray life on the edges of society. If you want to feel good about humanity you should look elsewhere for your reading material. Or, read Thuglit: Issue  8 after donning a pair of rose tinted glasses and loading your favorite shotgun.

After a brief intro by Todd Robinson, the stories begin with “McFerrin and Black” by Buster Willoughby. Working at the retirement home is a hard job, but it has its perks. Like when sometimes one of the old folks lets slip some information about riches to be found.

A wrestler is looking for a payday and a way out in “The Rightful King of Wrestling” By Chad Dundas. He might have of found both if he takes that gig south of the border.

The work of Patti Abbott is always a treat and this issue is not exception. In “The Higher The Heels” Cara Willis is a realtor who knows how to move real estate. Her personal track record with men isn't so good, but maybe Joey Rinaldi will surprise her in good ways.

A day in the life of a teen selling crack in North Charleston, South Carolina during the summer of 2012 is found in “Cocaine Starlight” by Isaac Kirkman. The crack selling is just part of it in this tale packed with details and backstory.

Sure, Edmond ran her down with his car and busted her up a bit. Something similar has happened before so what are a few more scars in “Three Days Ahead.” by Caleb J. Ross. He may have run her down, but he also is hanging out at the hospital and spending time with her. Can't say that about her family. He also has a plan for the future and she can be a major part of it.

His girlfriend, Tammy, told Russell where to go past the old Shiloh cemetery so that he could score for them. As long as he plays it cool with the dealers in “Nothing to Lose” by David A. Summers everything should be fine.

It is the late 30's and movie serials are all the rage. Working as an extra is good in “Extras” by Mark Pruett, but the side job is where he makes the money. He identifies problems for people and, for the right price, quietly removes them. Eddie Ross has had all weekend to make a decision and now it is time to close the deal.

Christmas Eve is not a happy evening for Max in “Not Even A Mouse” by Nolan Knight. A guy with the name of “Jello” is not doing any better. Max and Jello are on a collision course even if they don't know it just yet in the story that is the final one in the book.

Author bios bring the book to a close.

The latest in the series, Thuglit: Issue 8, is another solidly good one. The tales are dark, for the most part, and feature people on the edge doing the best they can to cope with reality in their own ways. Some ways work, at least for a moment in time, while other ones don’t.

Material was recently purchased for my use in an objective review.

Thanks for the kind words, Kevin.

You've convinced me I need to collect the THUGLIT issues I don't have.

I went to get this one and found I already have it. I will check it out and see if I read any already. Thanks for bringing it to my attention.