FFB Review: "As Tough As They Come" Edited by Will Oursler-- Reviewed by Barry Ergang

Friday means Friday’s Forgotten Books hosted by Patti Abbott. This week Barry is back with his review of As Tough As They Come edited by Will Oursler. 17 short stories are involved here in this anthology from 1951. After you read Barry's review take a look at Bill Crider's review of the book. I don't think you need another recommendation.  Make sure you check out Patti’s blog for still more books well worthy of your attention…..

AS TOUGH AS THEY COME (1951) edited by Will Oursler

An anthology of seventeen short stories, As Tough As They Come includes work by authors who emerged during the pulp magazine and paperback original eras. Many  are well-known to fans of crime fiction, among them two who wrote several novels each that have long been considered classics: Dashiell Hammett and James M. Cain.

Following a brief introduction by Will Oursler, the book opens with a story that's an immediate grabber. For Jim Crane, on his way to meet his girlfriend for dinner, things go from bizarre to worse. These include people inexplicably recoiling in horror from him, murder, attempted murder, a three-hour memory lapse, and a dead man walking in Bruno Fischer's "The Man Who Lost His Head."

NYPD detective Johnny Smith is a tough, no-nonsense investigator. Assigned to find the missing young, wealthy, and beautiful Hannah Stevens, he's only been on the case for three days but, having learned as much as he has about her, he's obsessed to the point of being in love with her. What can her fiancé Ronald Watt and racketeer Nicki Spioni  tell Smith before he has to say "Goodbye Hannah" in Steve Fisher's story?

Henry Treece's unnamed narrator is a young Welshman feeling a little cocky about being entrusted to look after the family farm while his parents, brother, and farmhands are in town for the day. His sense of self-worth—not to mention his sense of well-being—is pegged down more than a few notches by the menacing arrival of "The Visitor."

Police detectives Slattery and Connaughton have been sent to Illinois to bring fugitive Arthur King, prime suspect in the murder of Charley Kester, back east. Their "Journey By Night" is both literal and metaphorical as their railway trip takes them into the dark truth about Kester's death in Thomas Walsh's character-driven tale.

Dashiell Hammett's novelette "Corkscrew" takes the otherwise nameless Continental Op to the titular location, a sorry excuse for a town in Arizona, where he must serve as deputy sheriff/town tamer in a story that's as much—or more—a western as it is a murder mystery. One of the issues he has to deal with is as relevant today as it was in 1925 when the story was first published.

Helen Fiske's nightmare begins when she's awakened in the middle of the night by a couple of intruders who are looking for her husband Ralph. He's away overnight, having driven to Pittsburgh to interview for a job. But though she tells them that he's gone to Chicago and won't return for months, they settle down to wait, murder on their minds. Wanting to warn Ralph as well as save herself, Helen quickly learns there's "No Escape!" in this tense gem by Bruno Fischer, the only author to make two appearances in this collection. 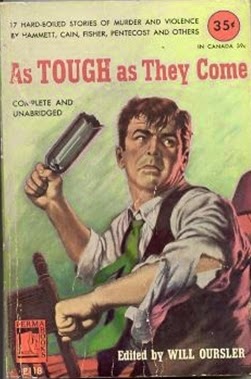 As a member of one of several shifts of men working for fifty cents an hour at the dangerous job of trying to subdue a California "Brush Fire," twenty-two-year-old Paul Larkin learns the hard way that two different acts of heroism can have radically different consequences in a story by James M. Cain.

Plainclothes detective Dave Glennan loves to needle his younger brother Nick, especially by referring to him as "Sparrow Cop" because the uniformed Nick's beat is the city park and the zoo within it. Separate and much too convenient circumstances cause the  Glennan brothers and Dave's partner to confront a pair of vicious, uncompromising crooks in a story first published in 1933 by future Pulitzer Prize-winner MacKinley Kantor that I thought was the weakest in the book: way too predictable on a couple of fronts, and containing some overwrought—and thus hokey—narrative moments.

I foresaw the climax in Brett Halliday's story, too, but the differences between it and the Kantor story are both in the tale and the manner of telling. One of a sizable crowd of people that includes the governor and other dignitaries, the first-person narrator relates to an eager listener how he helped the brilliant, resourceful "Big Shot" Charlie Morton attain the fame for which he's being rewarded.

"Gangster's Girl" Nellie is remembering her life with Tony while literally counting the minutes until she's free of him. Originally published in 1934, Lou Wylie's story is nearly all narrative, and with an ending most readers will see coming long before they reach it.

They call Cruze the Big Brain because of his skill at planning and executing heists. But when he and the others in the crew meet to split the take in a $120,000 mail robbery, their sights are set on Peewee Winters, who was supposed to bring the envelope full of bonds back to Cruze's apartment and failed to do so, having been knocked out and robbed at the critical moment. Now Winters must recover the bonds and identify the thief, or suffer the fatal consequences without revealing a secret that by itself could get him killed in L(awrence) G. Blochman's "Frisco Payoff," a rapid-fire, pure pulp delight.

Special Investigator Jack Wolfe has a reputation for being a trigger-happy killer. When Charlie, a reporter for The Courier, approaches him about it, he cites his position on the matter and offers Charlie the opportunity to be an "Invited Witness" when he goes after multiple murderer Shulz in George Harmon Coxe's tale.

If only tall pretty boy Johnny weren't in the picture, the midget Fritzl might stand a chance with the lovely Cynthia. So he devises a plan to deal with Johnny, one that has him disguised as a child in Larry Holden's "Lethal Boy Blue."

Willy Mason constantly deprecates and occasionally slaps around his wife Connie, whom he considers a stupid hillbilly. Willy works for the powerful racketeer Arturo, feeling like a "made" man when Arturo invites him and Connie to his penthouse for a party and a meeting. Arturo owns cops and politicians, but he's become the target of the new, young, incorruptible District Attorney Phillips. Willy's former prison buddy, known as The Preacher, is brought in to devise a plan to discredit Phillips, using Connie as the lure. But to Willy's power-happy, avaricious surprise, the supposedly brainless hillbilly has an even better plan of her own, which has Willy feeling "Mighty Like a Rogue" in Day Keene's novelette.

Gilbert Thomas tells the story of Craw and Butter, the latter known by that name because of his obesity. Neither of them had any expectation of success at prospecting; mainly they figured on just having a good time for a few days. But a critical oversight by Butter, and a freak accident that damaged the car, has left the two of them stranded in the blazing heat of the desert. Their only hope is a twenty-mile walk to a house they passed on the drive out. Survival might be a matter of "Natural Selection."

The Dunbars' marriage has effectively soured after twenty-one years. Emily yearns for a stylish wardrobe and nicer furnishings for their home. Andrew, who is always ready to indulge his several hobbies, is just as ready to supply a reason why they can't afford what Emily wants. When one of those hobbies makes him ill, Emily sees her own way to self-indulgence. The question is, will their implied contest become a "Dead Heat" in this story by Lillian Day and Norbert Lederer?

The collection ends with a novelette by Hugh Pentecost in which F.B.I. agent Ben Martin has been assigned to protect the beautiful Sandra Haley. A murderer has already taken the lives of four of her prominent family members, and she's the next likely target. Briefly married to the racketeer Jimmy Burke, known as a "Killer Diller," her family had her kidnapped from his apartment. Subsequently a private detective, who also became one of the murderer's victims, unearthed evidence that put Burke in prison. On the way out of the courtroom. Burke swore revenge. That was a couple years ago.But he's dead now—isn't he? So who has been committing the murders? Accompanying Sandra to the Silver Sails Hotel in the state's lake region, Martin there meets members of her social circle and suspects that one of them is the killer he must stop in this fast-moving whodunit.
Nicely varied as to plots and styles—although one can legitimately argue that not all of the stories fit the descriptor "hardboiled"—this is a collection that most fans of crime fiction should find entertaining.

Derringer Award-winner Barry Ergang’s website is http://www.writetrack.yolasite.com/. You can find some of his written work at Amazon, Smashwords, and Scribd.