For this final Monday of 2015 Kaye George offers a review of a thriller featuring a massive hurricane, body parts, and more……

This thriller is a fast read. Not because it’s short, but because it’s so hard to put down non-stop action. The short chapters, mostly five to six pages long, move the reader through the book like the hurricane sweeps through the story. 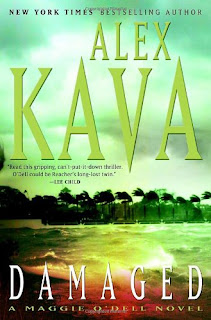 Hurricane Isaac is heading straight for Pensacola, Florida. It has already hit Jamaica as a category-4 storm, which means its winds were 131 to 155 miles per hour and caused “devastating” damage, killing dozens of people. It soon picks up to a catagory-5 with winds 156 miles per hour or greater and capable of causing “catastrophic” damage.

Some residents of Pensacola—the ones who rode out the last storm—don’t believe it will hit dead on, but most of the area is evacuating. Meanwhile, Elizabeth Bailey, a twenty-seven-year-old Coast Guard rescue swimmer and veteran of Hurricane Katrina, is part of a team who discovers a floating cooler of horror, full of body parts. They’re not even all from the same body.

Meanwhile…Maggie O’Dell, FBI special agent and profiler, returns from a bloody shootout to be sent by her unfriendly boss into the hurricane’s path to help investigate the discovery. No time to recover.

Meanwhile…Colonel Benjamin Platt, an infectious disease expert and a guy Maggie would like to have as more than a friend, is sent to the same area to see if he can figure out what’s happening to cause some mysterious deaths among military patients.

Meanwhile…a funeral director named Scott, who is Elizabeth Bailey’s brother-in-law, is getting himself involved in something that he knows should make him a lot of money. He doesn’t exactly realize what it is though.

The threads are woven together expertly against the backdrop of the impending storm, which is picking up power and heading straight for all these characters. The climax will keep you on the edge of your seat.

Reviewed by Kaye George, author of Choke for Suspense Magazine