Review: " The Haunted Season" by G.M. Malliet (Reviewed by Jeanne of the Bookblog of the Bristol Public Library)

If you read this blog on a regular basis you know that I frequently link to reviews at the Bookblog of the Bristol Public Library. Jeanne, on staff there, responded to my recent call on the DorothyL list regarding guest posts. The review below is her first contribution here. Hopefully,  the first of many more.

The Haunted Season by G.M. Malliet

This is the fifth book in the series about Father Maxen Tudor, former MI5 agent turned Anglican priest, and his parish of Nether Monkslip.  It should be a peaceful place, given that it’s a small English village, but the murder rate seems to rival that of Cabot Cove—at least since Max took over as vicar, an observation that is causing him a degree of worry.  Is it possible that he is attracting violence? 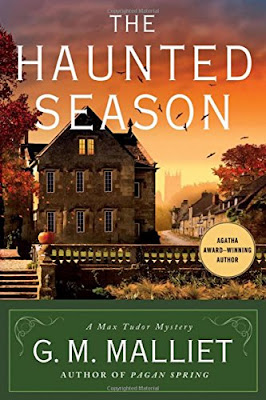 This time around, Max is still basking in the afterglow of being both a new husband and a new father while around the village excitement is building about the return of some of the local landed gentry.  Lord Baaden-Boomthistle and his second wife have returned to Totleigh Hall and hopes are high that they will condescend to take part in some village events.  Those hopes are quickly dashed when a vicious murder takes place, and Father Max is called in to help the police sort things out. Suspects abound, especially in the immediate family and household help. There is not, however, a butler.

I’ve read and enjoyed the four previous entries in this series.  Malliet uses a good bit of humor in her work, though she has a tendency to name drop a lot--the names of the current Royal Family pop up a lot, in fact more than I usually see in contemporary British mysteries, which serves more to remind me that Malliet is an American than convince me that she’s British. There are wry observations about human nature and characters are occasionally caught in perplexing situations, but the books never go over the top.  These aren’t exactly cozies, but neither are they gritty procedurals.  Characters are more important than forensics, and one of the strengths of the series is her vicar sleuth.  Max is well aware of the evils and moral ambiguity in the world, but he has a quiet but strong faith that good will prevail in the end.

Haunted Season impressed me mostly for its sense of spirituality.  Max is an Anglican, but his beliefs are not chained to one particular doctrine.  He finds his wife’s neo-pagan beliefs to be as valid as his own Christian ones.   There are some hints of the miraculous in the books, including an image that keeps appearing on the wall of the Church that defies all attempts to remove it.

Yet there was something a bit disjointed about the book.  The ending was a bit jarring, even as a long-standing plot line was resolved, and there are hints that changes are afoot for the next book.  Even with that caveat, I don’t believe that this is a series one needs to read in order.


For more reviews at the Bookblog of the Bristol Public Library please go to their website.
Posted by Kevin R. Tipple at 12:30 AM